So here we are on 12 May and there are no obvious signs either of the two remaining Peregrine Falcon eggs are hatching.   I originally stated I expected hatching would commence and/or occur during 7-12 May.  Over the weekend (7-8 May), the female disposed/ate three of the original five eggs (see this post and this post for more details).  Ally, the female falcon, and occasionally the male have continued incubating the two eggs leaving hope that a fluffball would emerge from at least one of them.  However, time is becoming a factor.  The longer nothing happens, the likelihood nothing will happen increases.  My original temporal estimation for hatching was off the cuff and was focused on when events might start, so perhaps a little more formal analysis would be informative at this juncture, while we wait.  If you’ve been concerned this blog hasn’t been nerdy enough, keep reading. So here I go estimating the probability an egg will hatch.  Based on the information I have, individual eggs were laid on 2, 4, 6, 9 and 11 April.   The incubation period for Peregrine Falcons is 33-35 days.  I’ll assume there is an equal probability (0.33 or 33%) an egg will hatch on one of these three days .  The expected possible hatch dates for the individual eggs would be 4-6 May for the first egg, 6-8 May for the second egg, 8-10 May for the third, 11-13 May for the fourth egg and finally 13-15 May for the egg laid.  Hopes that at least one or two of the eggs hatch depends on whether one or both of the two remaining eggs was one of the last two eggs to be laid.  The first egg laid was noticeably paler than the others and this was one of the three which were lost over the weekend.  This improves our chances.  If the observed egg loss was entirely random for the remaining four eggs, the probability that one of the remaining two eggs is one of the final two eggs laid is 0.25 or 25%.  The probability that both remaining eggs were the final two eggs laid is 0.08 or 8% (however, it is reasonable to believe the eggs that were lost were the earliest to be laid – this is a critical assumption).  Another important consideration is the recent track record of hatching success by these birds.   In 2014, two of five eggs hatched for a hatching success rate of 0.40 (40%).  Last year, one of four eggs hatched for a hatching success rate of 0.25 (25%).  The average hatching success rate for egg the past two years is 0.33.   We’ll use this figure for our final prediction even though the birds’ fertility may have continued to decrease this year.

The cumulative probability any egg will hatch this spring decreases each day and is as follows.

So there you have it.  Those are the probabilities over the next few days that we’ll see a fluffball.  If any one of the assumptions is wrong, the estimate will be off.  However, it is safe to assume that will every passing day the probability an egg will hatch decreases.   However, at least for now, there is still hope. 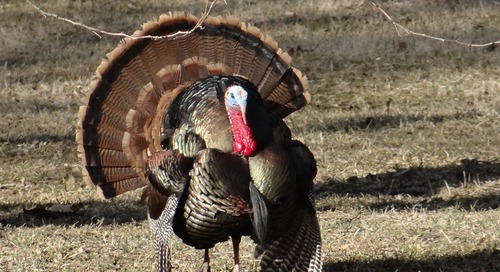