When photographing Nebraska’s great places, the moon and the sun are always welcome to the scene.

Whether it be the fast-beating wings of a zigzagging teal or the earth-hammering legs of a sprinting pronghorn, a quick “trigger finger” is often necessary for capturing imagery of the region’s natural resources.

Perhaps no photo subjects, though, get me in hot pursuit more than two that are the farthest from the camera. One is about 239,000 miles away. The other, almost 93 million miles. When you’re trying to catch them, even at that distance, each seems to move incredibly fast. What’s more, they never pause for the photographer.

I’m referring, of course, to the moon and the sun. As a photographer, or just a person who loves to marvel at nature’s creations, I thrive on those fleeting moments when one of the two most prominent features of the sky is juxtaposed with a beautiful Nebraska landmark. Our magnificent landscapes are just a little bit more magnificent with a big sphere hanging low above them.

Those who have experienced it surely agree: Western Nebraska, with its wide-open spaces and remarkable topography, is tough to beat for pairing celestial objects with terrestrial scenes.  ■

Usually, a bright moon is detrimental to capturing photos of stars. The “blood moon,” in which the earth briefly casts a shadow upon the moon, however, provided the opportunity to photograph Trunk Butte under the stars. Even though the moon is dimmed during the lunar eclipse, it still appears as the brightest object in the sky.

The ever-photogenic Crow Butte looks even better with a moon on top.

Rugged Pine Ridge scenery paired with a pretty sunrise that even features an outline of the sun. What’s not to love?

When the view is unobstructed, even much shorter subjects are game at sunset. This natural bouquet of western wallflower and other pretty plants was captured from prone position on the Oglala Grassland in May.

With views of buttes in multiple directions, Fort Robinson State Park is well-suited for moon photography. This is one morning’s view of perhaps the park’s most-photographed landforms, the Red Cloud Buttes.

While western Nebraska provides a wealth of opportunities for capturing the moon and sun, perhaps the state’s best bet to get wildlife in the scene occurs along the Platte River farther east during the annual migration of about 600,000 sandhill cranes.

On an August morning at Medicine Creek Wildlife Management Area in southwestern Nebraska, the haze was perfect for photographing the sun. I was thankful that a mourning dove helped decorate the scene.

Of course, not only natural subjects are appealing when paired with the moon and sun. Tall man-made structures, such as the iconic water towers at Fort Robinson State Park, also make ideal subjects.

Tips for Photographing the Moon and Sun

• Plan your shot. A wealth of resources exist to help you know when and where the sun and moon will rise. I use the Sun Surveyor smartphone app.

• Exposure on lunar images can be a challenge, as the camera’s meter will surely adjust for the moon’s surroundings and deliver a blown-out white circle with none of the lovely cheese-like topography. Because the moon is lit by the sun, the “Sunny 16 Rule” is an effective place to start. That is, at an aperture of f/16 set the shutter speed to match your ISO. For example, 1/100 second for ISO 100. If elements in the atmosphere are making it less bright, adjust accordingly.

• For the best moon images, shoot during “the blue hour.” That’s the period of twilight in which the moon is low and the sun is below the horizon, yet provides enough indirect light to illuminate the scene with a blue cast. Ideally, the brightness of the moon and partially obscured sun will come close to matching that of whatever foreground element you are trying to include in the scene.

• Shoot in RAW mode, which will give you more capability to make adjustments to exposure and other settings later.

• Use a lens with a large focal length, essential for capturing the enormity of the sun or moon as it appears to your eyes. Most of my best moon shots were taken at 500mm. The bigger the telephoto, the farther you will need to be from your foreground subject. For instance, for the image of Sugarloaf Butte in this spread, I was on Toadstool Road at the ghost town of Orella, which is about one mile away from the butte.

• Invest in a solid tripod and cable release. Shooting in low light conditions requires long exposures and the most miniscule of movements will blur the image at a long focal length. To avoid camera shake, this is the time to incorporate the “mirror lock-up” feature, if your camera has it. I spend a lot of time cussing the wind, which is sure to move a big lens hood, during these shots.

• Be ready and willing to move. One nice thing about shooting these scenes in western Nebraska is that there is plenty of elbow room. I am always thankful, or at least hopeful, there are not people watching me during these shoots, because I surely look goofy running around with a tripod or two trying to get in just the right spot.

The post Those Alluring Orbs appeared first on Nebraskaland Magazine. 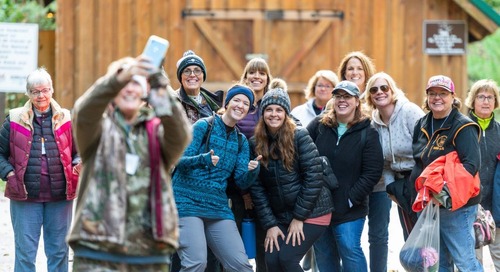 A Weekend of Exploration

My experience of Becoming an Outdoors-Woman As part of the communications team at Nebraska Game and Parks, ... 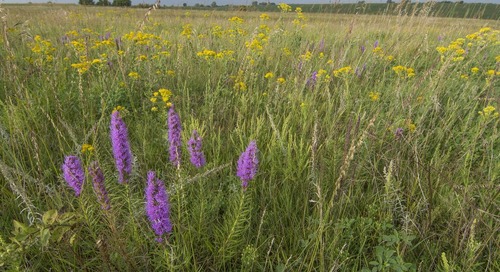 A simple quarter section of land contains a legacy of family memories and conservation. Back in 1960, my gr...