The stuff one witnesses in the great outdoors never ceases to amaze.

As of late, enter the story of the “rope buck.”

During Nebraska’s 2019 muzzleloader deer hunting season in December, the neighboring landowner who lives to the south of our farm was in his stand watching for white-tailed deer. A buck emerged at a distance, he closely examined it with binoculars. It was a nice-sized white-tailed buck, but something was very odd about its antlers. As the buck moved closer, our neighbor hunter noticed what appeared to be some sort of rope wrapped around a portion of its antlers. Really weird, he thought.

The neighbor hunter made the decision to legally harvest the animal, after all it was a decent-sized buck. Boom!

Subsequently, he cancelled the tag on his permit, tele-checked the deer, and then keenly inspected the rope entangled in the deceased buck’s antlers. A large amount of rope or cord, perhaps 20 feet or so, was completely wrapped around the left side of the buck’s rack. WOW!

The rope or cord didn’t look like anything that would be used on a farm or by a deer hunter as a haul line up to a treestand.

He texted me photos of the buck and its rope-wrapped antlers.

He said I could obtain the deer’s rack and meat if I desired at a local butcher’s shop. He left a custody tag with the buck.

I retrieved the rack and processed meat.

I showed him the rack with the rope twisted with it. Dick is a mentor of mine, and probably the most knowledgeable outdoors person I know.

Dick looked at it for minute, handled it and then said: “I believe I know what this is, Greg. It’s paracord. Look at the color, it was probably used as a waterfowl decoy line. Look at the broom corn stalk attached to it.”

By golly, I think he may have been right. However, the landscape in our general area is extremely hilly with woods, prairie, crops and creek bottom, I told him. We have no true waterfowl habitat and no one hunting ducks and geese, but we are about 1 ½ to 2 section miles from the north bank of the Platte River where much waterfowl hunting takes place.

“Ah,” he said. “Your mystery is solved because those white-tailed bucks tend to wander quite a bit. I’ll bet you that buck came from the river bottom up into your hills, maybe after a doe.”

More importantly, what lessons can be learned from the story of the “rope buck?” Pick up, recycle or properly dispose of trash and unwanted objects. Appropriately store all your gear!

Wild animals, not just deer, are always on the move and we should do our best not to have them get tangled up with human-manufactured equipment or items, whether on land or in the water. This translates to cleaning up unnecessary things where animals could get snarled.

Turpin says he hopes this instance reminds folks to take note of their surroundings. “Let this be a good reminder to look around your yard, acreage, farmstead, ranch place or where you hunt or fish, and see if there are any dangers for wildlife.”

Here are some tips to prevent wild animals from getting adversely connected with different objects:

The post The Rope Buck appeared first on Nebraskaland Magazine. 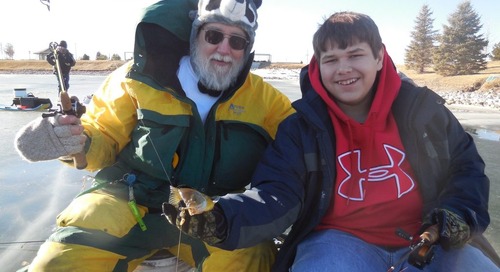 The first of these workshops is only a week away, so I want to spread the word: Game and Parks will certify...