Been a busy week, one in which I was out of the office most of the time!  I helped with our walleye egg collections, worked late nights most of the week catching the female walleyes from which eggs were collected.  We handled hundreds of fish, mostly walleyes, but during the week I handled a few muskies too.

There is just something about big predator fish, something awesome about them.  Every time I see one, every time I get my hands on one I just stare at them, just look.  One of my fellow fisheries biologists and I were ogling one muskie in a livewell tank and he reminded me of a Robert Ruark quote that was particularly fitting:  The author made the quote in reference to Cape Buffalo, the most dangerous game animal in Africa; he said “A buffalo looks at you like you owe him money”.

A muskie has that same look. Once I got home and back to my e-mails, I had a message from one of my fly-fishing acquaintances, one who is a very good stick, and takes tremendous photos.  He included a recent photo with his e-mail, it was not a photo of a Cape Buffalo or a muskie, but it was of another top-of-the-food chain, apex predator. . . .

The post The Look appeared first on NEBRASKALand Magazine. 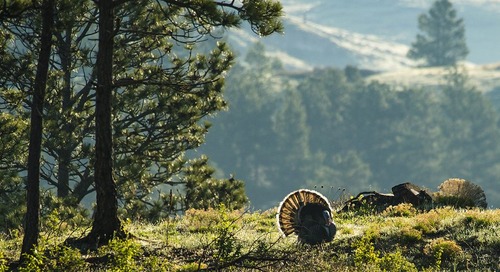 Nebraskans have become accustomed to seeing wild turkeys from border to border but it has not always been t...

LINCOLN, Neb. – It is time to feed the Hunters Helping the Hungry (HHH) program. The Nebraska Game and Park...