Home » NEBRASKAland Magazine » The End, The Beginning
× Share this Article

The End, The Beginning

Last adventure report I called that I might not be done ice-fishing yet.

Made it to more northerly parts of the state last week and crawled onto the ice one last time.  Believe me, my partner and I spent as much time checking to make sure we could get on and off and go where we wanted, as we did fishing.  Neither one of us ventured anywhere without the spud bar, ice picks and life jackets.

You know how the wind has blown in the past couple of weeks.  If you have spent some time on the ice, you also know how wind eats ice.  We got on, we fished, we watched ice conditions change by the hour.  Eventually, we got off.  That was it, we rode it to the buzzer. Oh yes, we caught fish.  The bite was late-ice good.  If only the ice would have lasted.

One last perch until next year, full of eggs. Oh, when someone talks about “honey-combed” ice.  Here is what they are talking about: Sure, it was 4 inches thick.  And, it fell apart like a house of cards.  This is why you have to use the spud bar!

Might as well throw in the obligatory, symbolic sunset picture: The evening of the sunset picture, I did not fish.  I drove a long way and arrived with just enough time to see the sunset.  While I was taking pictures, the coyotes were howling and I could hear swans somewhere in the distance.

There was not another sound; nothing but the sandhills.

I often listen to folks question ice conditions or fishing reports because they do not want to drive all the way just to find they cannot get on the ice or fill a bucket.  Are you kidding me?  If I had done nothing but drive all the way to experience that sunset, it was worth every mile!  I wish I could leave right now just to be there at sunset again tonight.

In the late fall/early winter, my transition from open-water to sitting on a bucket ideally happens within a week or two.  Often my late winter/early spring transition from ice-fishing to open water occurs much faster than that–within a day, has been at times within hours.

That means the vehicle is packed with gear, all the ice-fishing plus all the open-water gear.  I could use a big rig to haul everything at those times.

I used it all.

Found some running water and some willing trout on the way home: Missed a couple of brownies.

So, it is now “spring”.  Water is still darned cold, and we will have a hundred and sixty-two weather changes in the coming weeks.  I would rather be fishing through a hole in the ice, it would be much easier to catch fish that way under those conditions.

But, I know a guy who once said the only difference between ice-fishing and open water was the size of the hole.  He is right.

The post The End, The Beginning appeared first on Nebraskaland Magazine. 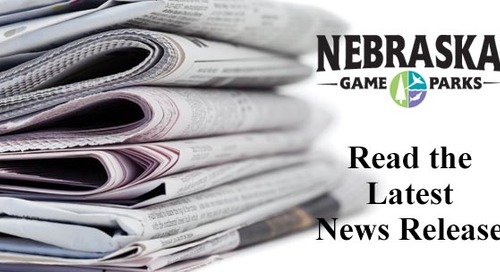 NORTH PLATTE, Neb. – The works of three Nebraska photographers and artists are on display through April 11 ...