The Clearwater Elk – A Follow-up

It was a bit quieter in farm country southwest of Clearwater this fall. Missing was the occasional bugle of a bull elk that showed up in Antelope County during the summer of 2006 when he was about 2 1/2 years old and stayed. “The Elk,” as he was known, spent the rest of his life in this neighborhood, leaving only when he headed 13 miles south to winter on the edge of the Sandhills in northeastern Wheeler County. The elk died last winter, apparently of natural causes. He was 13.

Merle Sehi of Clearwater first saw the elk’s tracks around his farm, but thought it was a neighbor’s cow. Soon after, while on his daily walk, he came face to face with the source of the track. Neighbors didn’t believe him when he told them he’d seen an elk, until they saw him themselves. The elk bedded in a shelterbelt during the day and wandered around the area at night, feeding in crop fields. He showed up on hunters’ trail cameras and was spotted from county roads, and became a local celebrity, drawing “tourists” to Sehi’s neighborhood who hoped to catch a glimpse of the young bull. I was one of those tourists, making two visits to photograph the elk that fall and capturing photos of him on both trips.

And then, the following January, he was gone, presumably for good. Young bulls often wander, and reports of just such a thing have come from many corners of Nebraska. A resident herd of elk can be found in the forested breaks rising from the Missouri River in eastern Boyd County 60 miles north of Sehi’s farm. Nebraska Game and Parks Commission biologists assumed that’s where the elk had come from, and that’s where he ended up.

But the next fall, the bull was back.

As it turned out, the elk hadn’t gone back north that winter. He was a snowbird of sorts and headed 13 miles south to Mike Dwyer’s ranch on the edge of the Sandhills south of Beaver Creek. Dwyer didn’t see the bull that winter, but a shed antler he found a year later told of his presence.

Dwyer first spotted the bull less than a mile from his home while on his regular morning drive to check on his cows in early May in 2008. “The first time I saw it I didn’t know what the hell the damn thing was,” Dwyer said, noting the bull had already shed its antlers.

Soon after, the bull left Dwyer’s place and by summer he was back in Sehi’s neighborhood. It was a pattern he followed most years for the rest of his life, heading south in December or January, and north again in May. “I still remember sitting on the road at our grove here looking to the south, and he was up in the hills running and bucking like a calf or anything else would when they’re young,” he said.

When Dwyer spotted the bull in the winter of 2009, it was still sporting his antlers. He was in the same area nearly every morning when Dwyer went on his drive. When he noticed one day the bull had shed an antler, he went looking for it. “I didn’t drive around too long before I found it,” he said. When the elk dropped its second antler, he found it where the elk had jumped a fence not far from the first. That search continued each April, and he has four full sets and the single antler the elk dropped in 2007 to show for it. “It evolved into kind of a game between him and I,” Dwyer said.

He only found one of the sheds in 2015, but his boy found the other half while deer hunting later that year and surprised Mike with it as a Christmas present. “You can’t believe the joy I had,” he said.

The bull frequented a tree grove on Dwyer’s ranch that remained from an old homestead. There, he would set up a trail camera next to mineral tubs filled with cracked corn. The set provided thousands of photographs of the elk.

He wasn’t there every year. “It broke my heart when I didn’t see him,” he said.

Sehi, who moved to Elgin a few years ago, said he usually first saw the bull in the corn fields in June or July. “He’d come out of the corn field and he’d have leaves hanging on his big antlers because he was starting to grow a new set,” he said. “I could drive down the road and see his tracks every day.”

Sehi’s neighbor, Ron Funk, who happens to be Dwyer’s brother-in-law, saw the bull regularly from mid-September through December. In the fall, the elk frequented the yard around his son, Mike’s, home, which sits less than a mile from Sehi’s old home and “wrecked” a fair share of the trees and shrubs they planted there as he rubbed his antlers on them in the fall. One night, while Mike was asleep, the bull let out a bugle while standing outside his bedroom window. “He said it sounded like he had his head in the window,” Funk said.

Others heard the bull bugle in the fall. Sehi only heard it once, but his son has a video of that occasion, captured while they were deer hunting.

During the past 6 or 8 years, Funk thinks the bull spent more time in a shelterbelt on his family’s ground on the next section west of Sehi’s where they had a food plot and a small patch of alfalfa. In April, he was driving through that shelterbelt on a four-wheeler, checking damage to fields following last spring’s flooding and also looking for shed deer antlers, when he spotted something odd poking up from behind a cedar tree in a shelterbelt. “I drove by that and I thought, ‘You know that looked funny,’” Funk said. “I thought it almost looked like the horn of that elk, so I turned around and went back and sure enough there he was.

“It looked like he naturally just went and laid down behind that cedar tree and nature took its course.”

The elk had been dead for some time, and coyotes and other scavengers had picked the carcass nearly clean. He was probably buried in snow when rabbit hunters had gone through there a few months earlier.

After having Jonathan Andreasen, Nebraska Game and Parks Commission Conservation Officer, inspect the carcass and confirm the bull died of natural causes, Funk was able to keep the skull. The bull was far from its prime. It had broken off its left antler near the base early in the growing stage, and the points on its right beam weren’t as strong. But it still sported impressive mass, with bases topping 10 inches.

Ron’s brother, Jim, found one of the antlers the bull shed in the spring of 2018. A neighbor, Dave Sehi, found the match 2 miles to the south. Fred Buhlmann found another set of antlers shed in 2009 in his corn field east of Bartlett. One of that pair found its way into the head of his combine.

Everyone in the neighborhood is going to miss seeing the elk.

“I already do,” Sehi said. “Everybody asks me about him, too,” he said. “Everybody wanted to see him. They were always watching for him. Even the school bus driver would make a point to go down a different road just to see if they could catch a glimpse of him.”

Funk last spotted the bull in December of 2018, when his son got a photo of him with a smaller bull in a corn field behind his house.

They hope that other elk will make the neighborhood his home and “we can keep the tradition going,” Funk said.

There has been no sign of him yet, but when there is, you can bet the residents of this rural community will let everyone else know.  ■

The post The Clearwater Elk – A Follow-up appeared first on Nebraskaland Magazine. 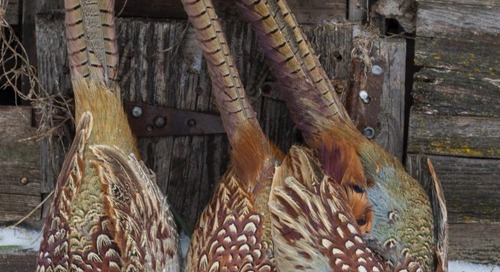 Marshes: A Winter Refuge for Pheasants

Nothing beats hunting a frozen-over, snow-covered marsh for wily rooster pheasants in the dead of winter. A... 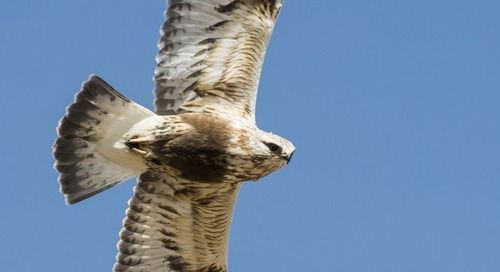 The rough-legged hawk may not stand out among raptors in looks, but it lives an interesting life. Perhaps y...