The Director’s Cup is a fun and challenging competition of archers of all skill levels and features a unique “Lake of the Woods” format. Targets are set in 5-yard increasing distances, and archers shoot three arrows at each target for a possible 600 points. Archers shoot 30 arrows in the morning and 30 in the afternoon. The winner of each division took a final shot in a shoot-off and the archer with the arrow closest to the center of the target was the winner.

Mitchell won the tournament at Lincoln’s Nebraska Game and Parks Outdoor Education Center, the facility where he first took up archery 2½ years ago in an introductory Explore Archery class. He progressed into Junior Olympic Archery Development classes for compound bows. Within a year, Mitchell was competing in archery tournaments, as his hobby became a passion, and he eventually became a member of the facility’s Center Shot JOAD program.

Mitchell not only shoots in indoor target, outdoor target, and 3-D competitions, he is a staff shooter for Blue River Archery in Fairbury. He regularly travels to competitions in other states and will travel to South Dakota this fall for the Outdoor National Target Championships. 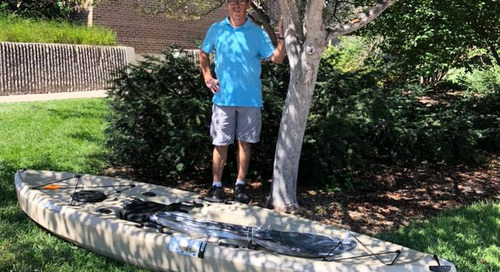 LINCOLN, Neb. – The Nebraska Game and Parks Commission encourages people to take someone fishing this summe...

LINCOLN, Neb. – Runners of all ages are invited to take part in the Hubbard Hoot Owl Days 5K Fun Run at Dan...