LINCOLN, Neb. – Hunters who took part in Nebraska’s 2016 fall turkey season were overwhelmingly satisfied with the quality of their hunting experience, according to a Nebraska Game and Parks Commission survey.

According to the survey, which was open only to 2016 fall turkey hunters, 63 percent were satisfied with their hunting experience. The results are based on 1,114 responses.

In addition, most hunters (55 percent) were satisfied with the number of turkeys they saw during the season – particularly nonresidents (67 percent).

Other findings from the survey:

— Given their experiences, 98 percent of all respondents would hunt in Nebraska again during the fall season.

— Twenty percent of nonresident participants were former Nebraska residents who continue to return to hunt.

— Overall, the counties where hunters reported harvesting most of their turkeys were Dawes, Red Willow, Custer, Buffalo and Lincoln.

— Most hunters were not hunting a particular sub-species (73 percent), but among those who were, the Merriam’s turkey was the most sought-after (17 percent).

— Most hunters were not concerned with correct feather coloration or the genetic purity of the turkey they harvested, even among hunters who reported pursuing a particular species.

— The factors that contributed most to hunters’ decisions to hunt turkey in Nebraska were availability of permits and turkey abundance. Among nonresidents, having family or friends living in the state was also an important factor.

To view results of the turkey hunter survey and a turkey harvest survey online, visit outdoornebraska.org/wildturkey. 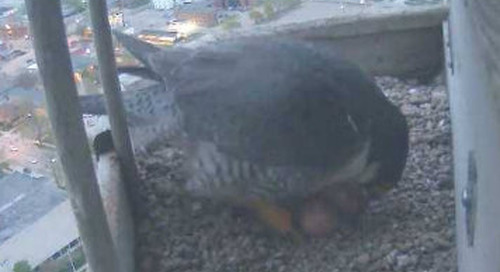 On Tuesday evening, the Peregrine Falcons welcomed egg #2. It is anybody’s guess how many more eggs there w...

LINCOLN, Neb. – Get outdoors for a spring day of fun, educational activities for all ages April 22 at Ponca...