There has not been a lot of activity on the state record front, but I have a couple of fish and a couple of stories to share with you:

The first goes way back to April; the application literally came in right after I cleared the last batch of state record applications.  So, Brent Stephens of Kearney believes that we forgot all about his state record catch.  Sorry, Brent.

I have told you about the “triploid” crappie in previous state record updates (State Record Update, Winter 2017), and about Kea Lake, the interstate lake at the Kearney interchange, being the ONLY waterbody in the state where we have those fish right now.  There have been a few anglers aware of the opportunity to catch a big crappie there and that if they catch one it may be a new state record.  Some of those anglers have been intentionally targeting the few big crappies in that pit.  Brent Stephens is one of those anglers and back on April 18 he bumped our triploid crappie rod & reel state record up to 3 pounds 4 ounces, just 4 ounces more than the previous record caught from the same water a month before.  Brent caught his fish on a jig, it was 17 1/4 inches long. The other new state record to tell you about was taken back in May.  Eric Funk of Lincoln was out to Johnson Reservoir on May 20th and arrowed a 56 pound 6 ounce bigmouth buffalo.  Eric’s fish was 41 inches long. Congratulations Brent and Eric, your state record certificates will be coming in the mail.

The only other state records I have to tell you about were fish that might have been or would have been. . . .

I will take every opportunity to brag about state record fish that were caught by anglers and then released!  The latest was a tiger trout also caught this spring.  Since we started stocking more tiger trout around the state a little over a year ago, I have expected our state record for that hybrid fish to be pushed higher and higher.  We have had a couple, three, new tiger trout state records in the past year, but honestly I expected more and bigger fish by now.  Those fish are out there, I know they are.

Logan Holtz told me about a 22+inch tiger trout he caught back in early April, a fish that would have shattered our tiger trout rod & reel state record which as of right now still stands at 2 pounds 1 ounce.  I am betting Logan’s fish would have doubled that record.  Now Logan told me he would send me a photo of the fish, but he said he was going to wait awhile because he wanted to protect his spot.  He just sent me a couple of very impressive photos of that fish, but he asked that I still do what I could to make it harder for the internet scouts to figure out where he was fishing.  I am sure going to honor that request, but he did give me permission to use the photo! BEAUTIFUL FISH!  Logan caught that big tiger on a fly-rod; well done and thank you for the release!

Just recently I have been hearing some “chatter” about state record class wipers being caught from a Nebraska reservoir.  I have seen a picture or two, and in my opinion those fish absolutely were in the class of our current rod & reel record of 20 pounds 1 ounce.  However, as I am writing this, I have heard nothing more about those fish, and have not heard that any of them have been submitted for certification as a new state record.  Until I have more concrete information, all I am going to tell you about is there are stories circulating, and they may be true.  Then again, maybe not.  I also am not going to say where those big wipers have been caught, because as I said, I officially do not have any confirmation as of now.  However, I will tell you that if you pay attention to the annual Fishing Forecast, you should be able to figure it out.  (wink, wink)

That is all for now.  I usually see some state record applications cross my desk in late summer, usually fish taken by archery or underwater spear-fishing.  Probably will have one of those in the mail as soon as I post this blog.  Ha.  Stay tuned. . . . 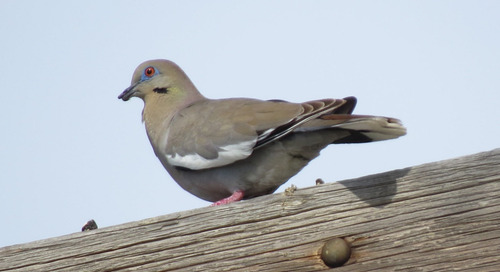 White-winged Doves are one of a handful of bird species rapidly increasing in Nebraska.  The dove is a nati...