Back in November I gave what I believed was my final “State Record Update” for 2016.  Nope.  Wouldn’t you know it, no sooner had I got that done and another state record application showed up on my desk.  This one was another fish taken by rod & reel, but it was a bit of an unusual catch–a grass pickerel!

On October 17 this fall, Christopher Butts of O’Neill captured his state record pickerel from a highway borrow pit in Holt County.  My Gramps lived in Atkinson and fished some borrow pits in Holt County, I wonder if I have been where Christopher caught his trophy pickerel?  Anyway our grass pickerel state record will now stand at 10 ounces, a whopping 13 3/4-inch grass pickerel. Now before you dismiss Christopher’s catch, you need to know a few things about grass pickerel.  Grass pickerel, as you can see, are a member of the pike family, Esocidae.  Their body shape is just like a northern pike or muskellunge, they are just, smaller.  I believe grass pickerel are the smallest pike, at least the smallest in North America.  Here is a closer look: The “teardrop” below the eye is a key grass pickerel characteristic.

Grass pickerel are native to Nebraska waters and the middle and upper Elkhorn River drainage has the state’s highest abundance of grass pickerel.  They can be found in several waters in the sandhills too, including some wet meadows and small drainages, even ditches, where you might be surprised to find any fish.

They may be smaller, but in their minds grass pickerel are every bit the predator that their larger cousins are.  They may not snatch muskrats and small poodles, but anything small enough for their jaws is fair game.  Yes, they have razor sharp teeth too, just down-sized like everything else.

Christopher caught his fish on some chicken breast!  See, they are meat-eaters!

Now grass pickerel may be smaller, but a 10 ounce fish is a true trophy!  World record grass pickerel run only up to ounces over a couple of pounds.  Our previous rod & reel state record, a fish caught in 1996, was 6 ounces.

Fisheries biologist Andy Glidden in our Bassett office filled out the paperwork for Christopher’s fish and took the photos.  Thanks, Andy!  Andy told me that Christopher knew he was after the state record grass pickerel and kept after it until he was successful!  An honorable quest, and “Congratulations”, Christopher.  Your state record certificate will be coming in the mail!

The rest of you, keep fishing!

Got a report from a reliable source of another 18-inch or so tiger trout caught by a fly-angler from Lake Ogallala waters–a fish that would easily have been a new rod & reel state record had the angler chose to get it certified.  He did not, the person I was told who caught the fish would much rather have turned it loose and avoided the publicity!

Anglers should be aware of ice conditions

LINCOLN – Spending a day on the ice with family and friends can be a fun way to enjoy a day over the holida... 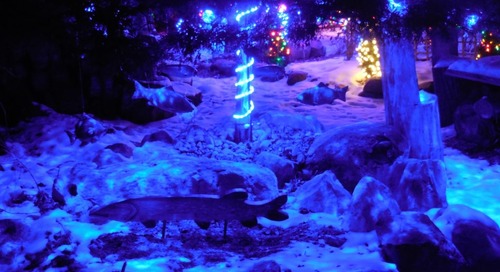 Going to be in and out of the office the next few days, mostly out, mostly on the ice! Wanna leave you with...