I have not provided the usual state record updates this year.  There was a slow start to the year with little to report.  Then, June rolled around and there were three, big, state record fish caught in back-to-back-to-back weeks.  I blogged almost immediately about them because they were so notable .  Let me get back on track by giving a full run-down here.  Might as well start from the beginning, way back in February. . . .

Hayden Hall of Auburn caught a silver carp from Duck Creek back at the end of February.  His fish weighed 15 pounds 1 ounce and was caught on a crankbait.  It was 33 inches long and more than doubled the old rod & reel state record (7 pounds 5 ounces). I had no more state record applications cross my desk until June.  Then they started pouring in.

The first was a minnow, a 3 ounce flathead chub.  Danal Wilkie of Broken Bow caught that 8-inch fish at the Milburn Diversion Dam.  It ate a nightcrawler. We did not have a rod & reel state record on the books for flathead chub.  Now we do.

A shorthead redhorse sucker taken by bowfishing was next.  Bowen Fitts from Scottsbluff arrowed that fish at Lake Minatare.  It weighed 3 pounds exactly and was 19 1/2 inches long. Then things got crazy.

My smartphone started going nuts on a Sunday afternoon.  There was good reason!  Richard Hagen of Swanton caught a new rod & reel state record flathead catfish from the Missouri River in Nemaha County.  Once certified scales were found that were big enough to do the job, Richard’s fish weighed-in at 89 pounds!  It was 55 1/2 inches long and ate a live bluegill. I immediately blogged about Richard’s fish, Stop the Presses, Big Fish!  The best part is that fish was released back into the river and who knows?  It could break the record again!

The next weekend my phone did not ring, but Monday morning when I got into the office I immediately had an e-mail with news of another big fish.

This time it was a 21 pound 9 ounce wiper, a new rod & reel state record.  Tou Kong Yang from Westminster, Colorado caught that fish from Lake McConaughy.  Tou’s fish was 36 inches long and ate a swimbait.

Again, I immediately blogged about that fish, Stop the Presses, Big Fish, Second Week in a Row!  That wiper beat the old record by a pound and a half, a record that had stood since 1999.

After having two big fish, state record fish, in two weeks, the next week I was expecting another.  Could it happen?  Not right away, but it did.  This time another bowfishing state record, an 81 pound 14 ounce bighead carp.  Richard Porter from Omaha arrowed that bighead on a private pit in Dodge County.

Bighead carp are another fish that can get quite large, obviously.  Richard’s fish beat the old record by 2 1/2 pounds.

I heard some whispers of record-class crappie back in the spring, but they never panned-out.

It never hurts to review the state record summary and rules in the Fishing Guide just in case you catch a surprisingly big fish.  Stay tuned.  When more record applications cross my desk, I will let you know! 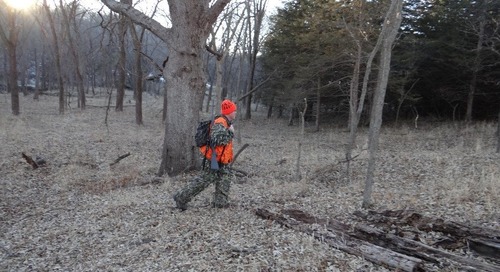 Get Fit For Hunting; Your Life May Depend On It!

You just read the title of this blog, and I know what you’re thinking (or voicing aloud): “Come on, Greg, r...