One record fish was taken by surface spearfishing in 2020.  It was a 10 pound 7 ounce silver carp taken from the Platte River in Hamilton County.

No state record fish were taken by underwater spearfishing in 2020. The second was an 81 pound 14 ounce bighead carp taken from a private pit in Dodge County.

Six state record fish were caught by rod and reel in 2020.  First, was a 15 pound 1 ounce silver carp from Duck Creek in Nemaha County. Once June rolled around things picked up.  A 3 ounce flathead chub caught at Milburn Diversion Dam was the first rod and reel record ever entered for that species. Just a few days later, an 89 pound flathead catfish was caught from the Missouri River in Nemaha County. The next week the very notable catch was a 21 pound 9 ounce hybrid striped bass (i.e. wiper) caught at Lake McConaughy. Then, as I stated earlier, the last two rod and reel state record fish were caught last fall.  A 1 pound 11 ounce green sunfish was caught from a Pawnee County pond. Lastly, the tiger trout rod and reel state record pushed another half pound heavier to 5 pounds 7 ounces.  That fish was caught from Sutherland Reservoir. That is the small and large of it.  A variety of state record fish were caught last year.

In my opinion, 2020 was a very good year.  Some very exceptional fish were caught that beat records that had been on the books for dozens of years.  The last four state records caught in 2020 were all caught on rod and reel and were very impressive sport fish!

You can see a complete list of all state record fish here, Nebraska Record Fish.

Rules for having a fish certified as a state record can be seen in the 2021 Fishing Guide.  Although I will not share any here, I always have stories of fish that might have been new state records if only the angler had known.  Look the list and rules over, because any time you put a line in the water, you never know!  The next bite could be a state record!

To keep you wanting more, I will tease you with news that we have already had the first state record submitted for 2021.  Yes, it was a fish caught on rod and reel, pulled through a hole in the ice, and it will beat one of the records listed here!  I will wait for a few weeks to see if we have any more records come through the ice this winter.  Stay tuned, and GO FISH!

LINCOLN, Neb. – Beginning Feb. 1, guests can make camping reservations up to 180 days in advance of arrival... 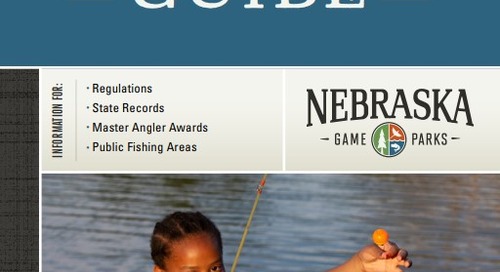