The apple blossoms have emerged.

Why is that important?

It is a reliable indicator that tells me I now will find one of my most valued vegetables in Nebraska’s rural landscape — wild asparagus.

Sure enough, I was right!

Wild asparagus, a hardy plant that comes back from the same root system every year, has many varieties and is a popular spring wild edible in Nebraska. I have found wild asparagus from Holt County in the northeast to Lincoln County in the southwest. To me, wild asparagus is one of the earliest signs of winter’s final end and the beginning of a new growing season.

Wild asparagus spears are normally ready for harvest shortly after the soil temperature reaches 50°F — that’s when spears will begin to emerge. Wild asparagus is gathered in Nebraska mostly in May, with mid to late May being the prime time for harvest. I have also found edible spears as early as in late April and as late as early June.

Asparagus growing rogue and freely in the countryside is really no different from the cultivated kind, except that it has a fresher, more vibrant flavor. This is partly because of the joy you get from finding such feral treasures, but primarily due to the minimal time between picking and dining. The neat thing about wild asparagus is that, once located, it can be harvested repetitively at intervals throughout the springtime!

But, where does a person actually find wild asparagus (botanical name Asparagus officinalis)? Here in the Cornhusker State, it can be hard to locate.

Keep in mind that asparagus loves light but doesn’t care much for woods! This herbaceous, long-lived perennial vegetable, introduced to North America and referred to as “the original ditch weed,” prefers sunny spots, or mostly sunny spots, in rich, fertile, saline or alkaline soil with plenty of moisture content around water — along ditches, roadsides, fence rows, pastures, meadows and even around old farmsteads.

I have found much wild asparagus along the north and west sides of abandon gardens where they were most exposed to the sun and did not shade shorter vegetables that were planted. And once you’ve spotted one plant, look very closely because there is bound to be more. I have often come across multiple plants within a 10-20-ft. radius, and even some stragglers a little farther out. I also look intently for dead plants from the previous year. There is often more than one spear spouting from where the old, dead growth is.

Honestly, the real secret to finding wild asparagus is to hunt for it in the fall. You can’t miss the feathery, bright yellow plants. And, once you know where the plants are, you’ll know exactly where to look for the spears in the springtime.

You can easily see wild asparagus in the middle of summer as well. When the plant “goes to seed,” the asparagus sends up a bushy, green, ferny stalk about 2-4ft. There are often a few in a cluster and they are easy to recognize.

Wild asparagus produces new shoots from the roots, sometimes for several decades. If you do not damage the roots and leave some spears to grow fully, you can harvest asparagus from the same patch, as I do, every year multiple times (every few days or so) throughout the spring for about a month.

What about frost? Wild asparagus can experience an occasional spring frost. Emerging asparagus is frost-tender. Any frost after the shoots start growing will cause discoloration and damage and those inedible parts of the plant need to be removed. After a light frost, the plants do grow back from the roots.

Remember, before you go searching for wild asparagus, know that you have an obligation to respect private property. Have landowner permission, know your boundary fences, don’t damage freshly-planted planted farm fields and ask if the area has been sprayed with potentially harmful chemicals (herbicides, pesticides). As with harvesting any wild edible food, offer to share some of your bounty with the landowner.

Well, harvest it! A sharp knife is the best tool to use for cutting the stalk even with the soil level. Take care not to step on any of the new shoots emerging.

Without question, I always end up finding the shorter spears (2 to 4-inchers) that typically need another day or two to reach their full potential. At about 4 to 5-inches, I will take it.

What about the tall spears? The top half of those are tender and quite palatable as long as they are not fern-like. I will leave the fern-like ones to nature because they are fibrous anyway. Essentially, the longer the spear grows, the woodier its stem base is. The ideal wild asparagus spear for harvest is about 8-10 inches long.

I want you to know that fat asparagus and skinny asparagus are equally as soft and easy to chew. Just because they are larger, doesn’t mean they will be stringy and leathery. In fact, I prefer the thicker spears! The girth of the spear comes from genetics and plant age. Toughness comes from the age of the spear that season, so generally taller equals tougher.

Other important information about wild asparagus

*Nebraska Game and Parks Commission owned and managed properties are not open to harvesting wild asparagus.

*The guidebook for wild asparagus-seekers is Euell Gibbons’ “Stalking the Wild Asparagus.” First published in 1962, it is both a practical guide and a poetically folksy ode to this delectable vegetable.

*Spotting the green wild asparagus in the midst of  other green-colored vegetation demands stealth, keen observation skills and above all, patience. Also, two sets of eyes are better than one, so go hunt a partner, if it works. Otherwise, if you’re heading out solo, be certain to file a plan with someone you know and trust of your destination as well as your departure and return times.

*A plastic grocery sack doesn’t work well for collecting morel mushrooms, but it does for gathering stems, stalks and spears of wild asparagus. Old bread sacks are effective collection vessels for wild asparagus, too!

*Dress warmly in layers and wear something that you don’t mind getting wet.

*It’s tick season! Tuck those pants into those white socks and use an approved tick repellent following label directions.

*Learn to identify and avoid physical contact with poison ivy (leaflets of three, let it be) and stinging nettles.

*As a forager, you have an obligation to respect agriculture and nature. Don’t damage or destroy freshly-planted farm fields or fences. Leave gates as you found them! Don’t disturb livestock or nesting wildlife. Pick up any litter, recycle it, if possible.

*Though it’s best eaten fresh (I have been known to sample young, tender stalks in the field), after a quick salt water soak and rinse with cold water, cut wild asparagus will stay edible for up to a week in the refrigerator. Stand the asparagus up in a glass or jar with about an inch or two of water, making sure all the ends are sitting in the water. I’ve found that a 2-cup measuring cup is a great container. Then, I cover the asparagus spears loosely with a plastic grocery bag. You can also blanch wild asparagus to freeze it for later use if desired.

*From a nutritional perspective, wild asparagus is a powerhouse! It is has no fat, no cholesterol and comprised of 93 percent water. Low in carbs and calories and very low in sodium, asparagus is a tremendous source of fiber, protein and folate. It fits ideally in a Keto-friendly diet. Wild asparagus is loaded with more than 20 different vitamins and minerals. The amino acid asparagine gets its name from the asparagus plant, which is relatively rich in this compound that contains diuretic properties.

*Why does asparagus change urine odor and color? Asparagus sometimes gives urine a greenish tinge and a distinctive smell, said to resemble rotting cabbage. When asparagus is digested, asparagusic acid gets broken down into sulfur containing byproducts causing a discoloration and smell to the urine.

*How about a little history? Asparagus is native to coastal regions of Europe and Asia, and was brought to North America by European settlers in the 1700’s. 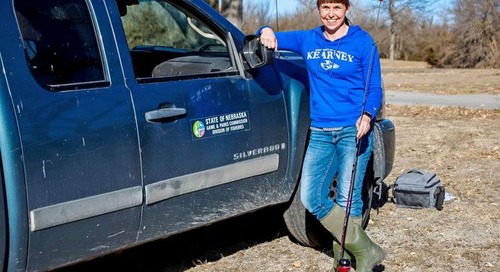 Research is just one of many jobs done by the Fisheries Division of the Nebraska Game & Parks Commission.  ...

LINCOLN, Neb. — Tickets are now on sale for Midwest Dueling Pianos set for June 5 at Lewis and Clark State ...