You have a current Nebraska spring wild turkey hunting permit and habitat stamp. You go hunting. You set up along a field edge bordering old-growth, open woodland habitat. You strike your slate call: “Yelp, yelp, yelp.” You pause for a moment. A gobble echoes nearby. It sounds like a jake, a nearly one-year old  male wild turkey born the previous spring. A few minutes pass. All of the sudden, here it comes running right toward the decoys, with its bright blue, red and white head, small, amber-colored beard, and black-tipped, iridescent feathers. Now, it is at your decoy and within shooting range.

Do you take the jake or not? That is question.

Why not? I say. After all, it is a legal wild turkey to harvest in the spring, isn’t it?

Truthfully, squeezing the trigger of your shotgun or releasing an arrow or bolt, comes down to a personal decision.

Every hunter has a different concept on what a trophy turkey denotes. And, there is absolutely no shame, no ecological harm with harvesting a juvenile male wild turkey.

Most of the longtime turkey hunters I know have no clearly defined rules about cancelling a Nebraska spring turkey permit/tag on jakes. Some hunters consider those nearly one-year old male birds the same as older males – gobblers, that is, legal, obtainable turkeys. Others would never shoot a jake, and still others won’t shoot jakes unless they come in strutting and gobbling, in which case they are treated just like a mature tom. Many seasoned turkey hunters might have jake rules for themselves, but not for the people they take hunting, especially youth, novice or physically-challenged hunters.

Consider what Mark Goodwin of the Missouri Department of Conservation wrote about harvesting jakes: “By spring, jakes have eluded daily perils for 10 months. They are woods-wise veterans and masters of survival. As such, they are elusive prey for any predator from bobcats to camo-clad hunters carrying tightly-choked shotguns. Therefore, a jake called in and cleanly killed with one shot represents superior woodsmanship.”

So, what’s your view on taking jakes?

Does your blogger shoot jakes? You bet I do! I’ll shoot one of those round-spurred, short-bearded male versions of Meleagris gallopavo, with his pointed wingtip primaries and four middle tail feathers extending skyward, typically longer than the rest. I will normally bag a jake for my first bird or perhaps my last bird of the spring season.

One thing I love about jakes is that they continue to gobble quite well late in the season as pecking orders in flocks continue to change place. Oh, and did I mention those young male wild turkeys are so tender and succulent to eat? Fresh, pan-fried slices of jake turkey breast are favorites of mine!

But, let’s dig a bit deeper into the issue of taking jakes.

You may be wondering if there are biological ramifications to a flock or flocks of wild turkeys in an area if hunters are shooting jakes. Still other hunters are curious if harvesting jakes will ruin the chances of seeing many 2-plus year old adult gobblers the following spring if that is done.

“There are no biological reasons to not shoot a jake,” he tells me.

“Mother Nature creates a surplus of male wild turkeys, the jakes are not effective at breeding, turkeys move around a great deal and natural mortality takes more jakes than hunters do” emphasized Lusk. “From a biological standpoint, if we thought that spring wild turkey hunters should be restricted from shooting young male wild turkeys during the spring season, we would do so, but that is not case.”

“There are a lot of young male wild turkeys that were not harvested that could have been,” he added. “In addition,

Lusk continues: “When managing the wild turkey, coupled with harvest data, research overwhelming shows that you can remove a good portion of jakes and still have a healthy turkey population with plenty of gobblers for ensuing years.”

The main limiting factors on wild turkey populations, he points out,  include cold, wet spring weather, tough winters, and changes in habitat quantity and quality.

Here is what other hunting, wildlife and outdoor education professionals have to say about taking jakes in the spring:

Douglas Herman, champion turkey caller, custom nail turkey call maker and Nebraska wild turkey hunting guide: “At the hunting lodge I prefer clients don’t (harvest a jake) unless it’s a kid, then it’s fair game. But, if a jake comes in gobbling to the call and he is strutting, then I will certainly treat him like a gobbler. The goal of turkey hunting is to tote a legal turkey out of the woods. The only thing I brag about is how good they taste.”

Rich Wiese, custom slate call turkey maker and avid wild turkey hunter: “My thoughts are, yes, it’s okay to shoot a jake. I’ve shot jakes when I was first starting to hunt turkeys in Nebraska. I choose now to shoot mature toms but if a kid or a first-time turkey hunter has a jake in front of them, I say take him! Why not? Get that first bird out of the way, make memories, and build up from there.”

Christy Christiansen, Outdoor Education Specialist at the Nebraska Game and Parks Commission: “I am not a turkey snob and would not hesitate to take a jake!”

Jim Zumbo who holds degrees in forestry and wildlife biology, and is a popular firearms and hunting commentator and writer: “I’m lucky enough to have taken the World Slam (Harvested all U.S. wild turkey subspecies — Eastern, Osceola or Florida, Rio Grande, Gould’s and Merriam’s plus the Ocellated wild turkey — found in Mexico and Central America), and I normally hunt several states every year. I’m not ashamed to say that I’ve taken home some jakes. To heck with the social implications among my hunting buddies!”

Brian Lovett, well-respected, freelance writer and editor in the outdoor industry for many years and one of North America’s foremost experts on wild turkey hunting:  “I typically do not (take jakes) Greg, but only because I’ve been blessed to turkey hunt quite a bit throughout the country. There is no biological reason to pass up jakes, as any harvest of young males is not additive mortality. I always tell folks that any legal turkey is a great trophy.”

Bruce Ingram of the National Wild Turkey Federation: “Regardless of the reason, if a jake is taken legally and the hunter is appreciative of the harvest, many believe it is a good take. Besides, the best way to gain the knowledge of how to kill a turkey is to kill one.”

Susie Hintz Bliss, ardent spring wild turkey hunter and Nebraska Game and Parks Commission staffer at Schramm Park State Recreation Area: “The jakes are sure fun to watch in the spring. I would take a jake. I kind of compare it to taking a white-tailed deer doe during the deer hunting seasons. Like the does, the jakes are very tasty.”

The post Spring Turkey Hunters: Why Not Take A Jake! appeared first on NEBRASKALand Magazine. 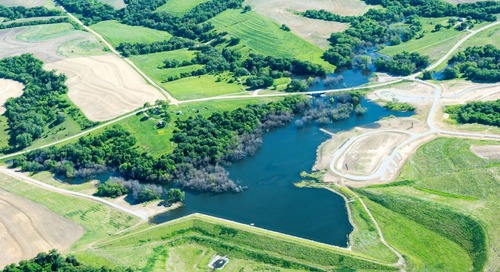 Many of you in southeast Nebraska have been looking forward to the opening of a new reservoir, Duck Creek, ...