I have often said that THE KEY to spring turkey hunting is to scout, and then scout, and before you are finished, scout some more.  Simply put, no one can call birds where they do not want to go, so you better know where they want to be.  I will admit to you that my son has put in much more time scouting for us this spring, but the time spent hunting the same areas year after year, in other words experience, counts for a lot too.

For example, with scouting and time in the field we have identified areas where there just always seem to be turkeys.  In those spots the habitat is perfect and the birds like to spend time there, every year, year after year.  So, yes, there are locations where we tend to kill birds in the same place from year to year.  With time in the field, you get a feel for those spots that seem to have it all, places where you could do nothing but just spend time sitting patiently, quietly, still, and eventually a Tom would show up.

One of those locations paid off for me again this season.  It is a corner where there are several edges that come together–fields, trees, some grass, a creek bottom, and it always seems to have a lot of turkey activity.  I am not going to tell you that any special turkey hunting tactic, or call, was a key to success.  I am going to tell you my son and I knew where the birds wanted to be, and sure enough they showed up.

We love evening hunts.  Sure, sunrise is the classic time to hunt spring turkeys, and often the best time to hear gobbling, but birds can be taken at all hours of the day.  If you have done your homework and know where they want to be in the evenings, you can be very successful.

The evening I took my bird this spring we actually spotted turkeys as soon as I parked the pickup.  In fact, we spotted them a little closer than I would have liked.  They certainly saw us too, but we did not go chasing them, stood still and watched, and eventually they just drifted off into cover and went back to feeding.  There were several hens in the bunch and a big Tom strutting behind them.  The Tom had a very respectable beard, we could even see it as he walked away from us.

So, knowing where the birds were and where they wanted to go, we made a big loop out around a hill to get into position without spooking birds.  As we got there we had to wait for a couple of hens to feed out of sight–there were already birds in the sweet spot.  The hens left, we quickly threw out a couple of decoys, sat down and got comfortable.  In less than a half-hour we had birds feeding in the field north of us, the same bunch of hens and the big Tom that we had spotted initially.

I called some, but not much.  The Tom was going to follow the hens.  If I could have started a conversation with one of those hens, I would have called more, but they were relatively quiet.  When it comes to calling, I usually try to mimic what the actual turkeys are doing.

Not much else to say about the hunt, we watched the birds take their time feeding through the field; Tom bred a hen at one point.  I thought the birds had left us once, headed a different direction, I called some, and eventually they came over a rise headed right for us.  My calling had nothing to do with turning them, they were on their way all the time.  A hundred yards, fifty, forty, I waited for the Tom to strut through the corn stubble, wings brushing the stalks, until he was in range for an easy shot.  For a moment I wondered if I had lost my chance while waiting for a “slam-dunk”.  He had strutted into range, still heading straight for me, but I paused to let him get even closer.  Then he turned and strutted to my left farther away.  Eventually, the dominant hen, maybe the one he had just bred, started feeding back my way with the big Tom trailing behind.

She walked past.  He came strutting behind.

At 25 yards I squeezed the trigger. My son Daniel was along for the show.  We had to stage a few more shots before driving home.  Love this old homestead foundation. Vital statistics:  21 pounds, 9 1/2-inch thick beard.  Actually, since he was strutting nearly all the time, I am afraid I took the shot when his head was pulled in and subsequently shaved a few strands from that beautifully thick beard.  Usually we can get them to stick their head in the air for the shot.

Oh yeah, he had HOOKS! Not done hunting turkeys yet this spring.

Gotta go, I hear another one gobbling!  “Stay tuned”. 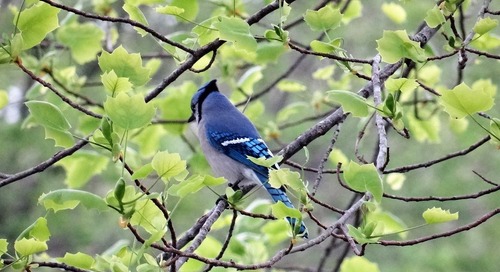 “What wild creature is more accessible to our eyes and ears, as close to us and everyone in the world, as u...