There is no question the most common phone call/e-mail/FaceBook message I have received in the past few weeks has been about some dead fish in this or that location across Nebraska.  This has been widespread enough that we put out a news release last week:

LINCOLN, Neb. – Spring fish die-offs in Nebraska are not unusual. Reports of these fish kills – which have been due to natural causes – have come from a variety of water bodies across the state in recent weeks.

“Winter is a hard time for fish, and they can experience stress coming out of the winter,” said Daryl Bauer, fisheries outreach program manager for the Nebraska Game and Parks Commission. “Our relatively cold spring coupled with wild temperature swings and the recent warming trend can further stress fish.”

Bauer added that many species of fish spawn in the spring and annual spawning rituals add even more stress. “Ultimately, stressed fish are more likely to succumb to some sort of infection or disease,” he said. “Fish with bacterial infections have been observed on many waters in the past couple of weeks.”

Fish taken by angling should be safe for consumption if the fish are thoroughly cooked.

The public should promptly report numbers of dead or dying fish to a conservation officer, Game and Parks district office, or the 24-hour Nebraska State Patrol pollution complaint number at 402-471-4545.

For more information about fishing in Nebraska, or to buy a fishing or park permit, visit OutdoorNebraska.org.

I realize by now this is not new news for many of you, so let me make a few additional comments. . . .

We see some fish mortality in the spring every year.  Yes, some of that is seen at ice-out and would be fish that perished during the winter, but it is not unusual to see some mortality throughout the spring.  This year it seems to have been worse and more widespread probably because of our schizophrenic Nebraska weather.

From winter right on through spring and spawning there can be several environmental events that can stress fish, especially certain species of fish.  The more stressed they become the more likely they are to perish from disease or predation.  Us cold, matter-of-fact, calculating, pointy-headed fish and wildlife biologists have a saying, “Mother Nature is a cruel witch”.  It is not an easy life living in the wild.

Speaking of biology, I think it is important that folks understand just how much mortality is experienced by a population of fish in a year, every year!  Total annual mortality will vary a lot from species to species, waterbody to waterbody, even fish to fish depending on age, size, health, etc., but it is not unusual for fish populations in the wild to experience as much as 50% mortality or even more in a year!  And, consider that annual mortality for a population of fish will be much higher for small, young fish–99% mortality or maybe more for the smallest fish that just hatched.  However, also remember that is why fish produce literally thousands of offspring.  Oh yes, it is a fish eat fish world!

It is natural to see some dead fish and think the worse, but a more realistic understanding of the situation comes from knowing that there are a lot of fish that survive these events.  As a matter of fact, the fishing has been great throughout the state in the past few weeks even as some die-offs are occurring on the very same waterbodies!  It is not so much a matter of how many died as how many survived, alive and healthy.

I also know in the world in which we live that as soon as someone sees some dead fish they assume there is some chemical or pollutant that is responsible.  That does happen, but the truth is that by far most fish die-offs are the result of natural causes.  Rarely has some villain poisoned one of our waterbodies.  There are a variety of scenarios that can result in low oxygen levels that can cause significant die-offs.  Or, as we are seeing this spring, stressed fish are more likely to contract some kind of infection, parasite or “disease” and succumb.

I am not saying that folks should not be vigilant and protective of our water quality and aquatic life.  ABSOLUTELY, I hope we all care about those thing very much.  What I am saying is if you see a few dead fish, do not immediately assume that one of the neighbor’s sprayed something that is killing fish and creating an ecological disaster.

Keep your eyes open and if you see a fish die-off never hesitate to report it!  Chances are we are already aware of the situation, but initial reports almost always come from someone making a phone call or sending us a message.  Just understand that many times those events are natural and that natural mortality is significant in all of our fish populations, all the time. 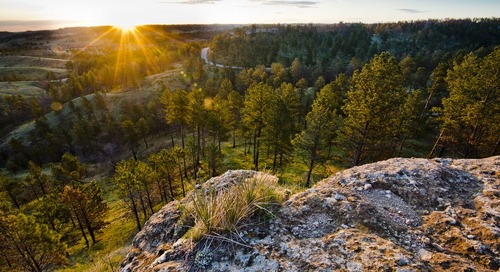 CRAWFORD, Neb. – Arts, crafts and music are on tap for the fourth annual Fort’s Market at Fort Robinson Sta...