I have fished for a few years now; long enough to realize that oftentimes little things make a huge difference!  The learning never stops, even in a lifetime of fishing, and the best anglers know and do so many of the little things that they do not even think about them–“Why do you do this or that?”  “I don’t know, because I always have.”  The best have forgotten more things than most anglers will ever know.

Sharp hooks are one of those little things, and one that I have blogged about before.  But, I found this video by walleye pro Ted Takasaki, and it is right on, short and RIGHT ON!

If you like to jig fish for walleyes, this week's Ted's Tips is a must see!

Never mind that Ted mostly is talking about fishing for walleyes, mostly with jigs, and he mentions early spring.  Don’t mean nothing!  Sharp hooks catch more fish ALL THE TIME.  What he is saying and demonstrating is crucial whatever you fish for, whenever you fish, whatever bait you use.

And most anglers don’t even think about it.

Oh, and some baits brand-new, out-of-the-package have terrible hooks.

So, get smart, get some good hook files and use them.  Get crazy, compulsive-obsessive about checking hook sharpness and doing something about it!  A good hook file is mentioned in the video, Luhr-Jensen Hook File; there are other good ones on the market too.  I really like a diamond hook sharpener for touch-ups, especially on small hooks.

You can tell I have been sharpening hooks by looking at my thumbnails.  A manicurist would faint, but I ain’t no pretty boy.  My nails never match my ensemble and fish like they do for my daughter. Treble hooks on crankbaits can be more of a challenge, but there are times when I will sharpen them too.  However, with crankbaits you will discover that sometimes the easiest thing to do is replace the trebles with high-quality, sharp, replacement hooks.

Sharp hooks are especially critical with the light lines and small hooks used for ice-fishing–hopefully just around the corner!

Oh, shouldn’t mention this other “little thing”, do not want to give away too many secrets, but pay close attention to the other little tip mentioned in the video too. 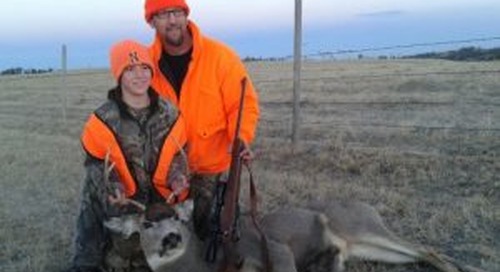 Hunting the Rut: 10 tips to make the most of it

I am sure if you asked bucks in Nebraska they would suggest this is their favorite time of year.   They fin...

LINCOLN, Neb. – A Gretna man was hospitalized with apparent pelvic injuries after falling from a tree stand...