I have been “out and about” on a couple of trips in the past few weeks.  Those trips were for events where my attendance was requested.  Pretty much everywhere I go, all the time, the fishing gear goes with me and I work in at least a little time for myself on the water.  Yes, that is my job too, but it is also who I am!  It has always been that way.

In an earlier blog post I mentioned how nice it is to be able to dip my feet into the cold waters of some of our Trout fisheries during a hot summer day (Dog Days Adventure Report).  A couple of evenings I was able to do that again.  The fisheries I am talking about would be the cold-water habitats we have in Nebraska that can support trout year-round.  If you need some ideas on where these cold-water fisheries are, and the fishing they offer, be sure to check out Trout Fishing in Nebraska’s Streams.  I will not tell you exactly where I was, but here is a really good hint:  It is a very productive tail-water trout fishery below one of the state’s biggest reservoirs.  It is a quality trout fishery that compares well with any in the country.

I did not catch a lot of trout the evenings I fished, but I did not get skunked either.  And you know what?  In mid-summer, that is a pretty good trip!  Of course I broke off a big fish; it was my own stupid fault.  I should have been more diligent to keep my spinning reel spools full of fresh monofilament!  It has been a few months since I have caught a Tiger Trout, got another one of those, bigger than the last one I caught, but still not nearly as large as I hope they get. Met up with a buddy for an evening on one of our Nebraska reservoirs.  He had his mother in the boat with him, and before I could get on board she had jigged up a 16-some inch Walleye.  That was a good sign.  We spent some more time jigging after I got on the boat and eventually scratched a White Crappie, White Bass, Freshwater Drum, Flathead Catfish and then a fat Common Carp that was NOT foul-hooked, it ate the bait.  It was actually a very nice Carp, it definitely ate the bait, and even though there was some reluctance to hold it, we got pictures! A good point to make here is that there are gazillions of natural baitfish and other natural prey items present in our waters right now.  All of the young-of-the-year (YOY) baitfish have hatched, insect activity is at a summer peak, and the aquatic food chain is full of food.  That is why fishing gets tougher this time of year, the fish are still feeding, they have to eat to live, but they have no problem finding a meal right now.  In many of our large Nebraska reservoirs, Gizzard Shad are a primary prey item and there are literally Gizzard Shad everywhere right now, and nearly every fish in those reservoirs, certainly every predator fish is eating the same thing–YOY Gizzard Shad.  Catching a variety of species all on the same presentation at this time is not unusual on many Nebraska reservoirs.  Imitate the abundant YOY baitfish and you never know what you might catch.

As the evening progressed, it appeared that the Shad schools were becoming more mobile and perhaps higher in the water column.  Yes, it took a depth-finder to see some of that, but looking over the side of the boat and being observant also provided clues.  We decided that a switch in presentations might be more effective at that time, so we quit vertical-jigging and broke out some crankbaits for a few trolling passes before we quit.  That produced a couple more White Bass and if I recall, another Drum, and then we finished with a double.

Actually, we hooked two fish at the same time on the rods on the port side of the boat.  Naturally, the lines then got crossed.  We scooped one Walleye into the landing net, another 16-some inch fish, and I managed to keep the other fish hooked and get the lines untangled.  Then, we finally figured out we had a really nice fish on the other line, and after tangled lines and some runs near the boat managed to put her in the net too–a 25+ inch Walleye!  We quit after that, did not even make another trolling pass; figured it was a great way to end the evening.

After a long hot day the next day, I waited until sunset to slip out for some more fishing.  I expected the evening and after-dark period to be my best chance for some fish, but also worried that if the wind died I might be in for a tough bite.  Well, the wind died and when I show you the next picture you will know what I caught: Yep, pretty pictures of sunsets pretty much mean no fish.

My sister and niece from Montana made a quick trip down and my family and I got together with them and my Mom one day for some picnicking and fishing.  No, the fish were not big, but we had a good time together “drying off a few”.  My sister has a son, my nephew, who is busy all summer guiding fly-anglers on the Bighorn River in Montana.  He did not get to make the trip, but my sister has gotten pretty good at listening to instructions from him and catching fish.  After all these years, she finally started listening to me too! Those are my most recent adventures on Nebraska’s waters.  Yes, it is mid-summer and I will not tell you that the fishing was easy or that lots of fish were caught anywhere.  But, again I will return to the theme of variety, Nebraska offers a variety of fishing opportunities for a variety of species.  Sure, it is about fun, friends, family, and beating the summer heat, but it is also about catching fish and at the end of the day, some pretty nice fish.  It will always be about that too!

LINCOLN – Enjoy a fun and safe day of easy competitive shooting for the entire family at the Rimfire Steel ... 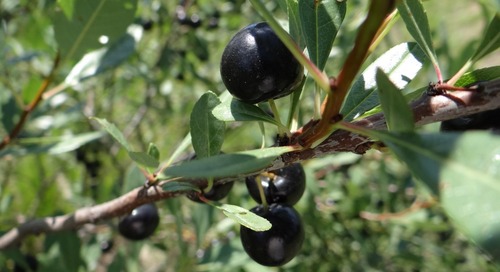 Who needs to buy fruit at the supermarket, when nature’s fruit market is open for business, at no charge, r...