This fall, the Nebraska Game and Parks Commission, along with Pheasants Forever and Quail Forever, introduced a new challenge to hunters –  the Nebraska Upland Slam. The concept of the Upland Slam is simple: hunters must harvest all four of Nebraska’s primary upland game bird species – sharp-tailed grouse, greater prairie-chicken, ring-necked pheasant, and northern bobwhite (quail).

Since the prairie grouse opener on Sept. 1st, hundreds of hunters have taken advantage of Nebraska’s diverse upland hunting opportunities and great access to public lands while pursuing their slam. The pheasant/quail opener on October 27th marked the first date hunters could complete the slam. So far, ten upland hunters have completed the Nebraska Upland Slam – successfully harvesting all four birds. The submissions were verified and it’s official!

Congratulations to the first 10 hunters who have officially completed their Nebraska Upland Slam! Aaron Herring
As a brand new Nebraska resident, Herring was looking forward to hunting new habitat and exploring what this state has to offer. What was even more exciting, was the chance to pursue two new species of birds. Herring harvested his first ever greater-prairie chicken and sharp-tailed grouse this season. When asked what motivated him to attempt the Upland Slam, Herring stated, “I am new to Nebraska and love upland hunting. This challenge just added that much more incentive to it.” Herring was able to harvest three out of the four birds on public ground this fall, and spent his days in the field hunting with new friends that he has met during his residence. Congratulations on an incredible start to your upland season, Aaron! John Laux
John Laux has been hunting upland game in Nebraska for his entire life, eventually turning his love of hunting into a career. He is currently the Upland Habitat and Access Program Manager for the Nebraska Game and Parks Commission and helped develop the Nebraska Upland Slam.

“The diversity of hunting opportunities we have throughout the year is why I love Nebraska, he said. “In early fall I try my best to do it all – prairie grouse, doves, teal, rails, and snipe.“  An avid bird hunter, he was excited to get his puppy, 10-month-old Llewellin setter, Lucy, started in the field. Lucy quickly learned the game with Laux’s direction, and they were able to harvest all four species of upland birds on public ground this season to complete Nebraska’s Upland Slam. “So far this year, I’ve hunted upland birds exclusively on public lands.  It’s fun to venture out and try new areas and I think this makes you a better hunter. The key is just loading up the dog and getting out there – you just have to go whenever you have a chance.“ Mark Frickel
The challenge of harvesting all four species of upland birds in one season was what drove Mark Frickel to complete the Upland Slam. His passion for hunting alongside his bird dog, and to complete the slam on all public ground added to the excitement for Frickel. The pursuit of the sharp-tailed grouse lead him clear out to the pan handle. “I hunted completely new terrain. It was 20-30 miles from where I grew up, but I never had any reason to hunt that area.” After recently returning to Nebraska where he was born and raised, Frickel was excited to get out and hunt the pheasant and quail opener, which he hadn’t done in some time. With the Public Access Atlas as a guide, and help from fellow hunters, Frickel found success in new terrain. “The places I hunted, I had never hunted before minus one. It was great to see new country.” Patrick Breitkreutz
An avid upland hunter, when Patrick Breitkreutz learned about the Upland Slam, he was excited to get to get out and add another level of excitement to the season. He hit the ground running in pursuit of grouse with a seasoned bird dog and an 8-month old puppy. Although none of the species were new to Breitkreutz, he hadn’t shot a sharp-tailed grouse in approximately fifteen years. Most of the land he hunted was familiar to Breitkreutz, but he did have the opportunity to hunt new ground when he attended a local wedding. After reviewing Open Fields and Waters sites in the area, Breitkreutz headed out the morning of the event and hunted public ground in Cuming County. All of the birds and new land aside, the most memorable experiences of the hunts were being alongside his father. Breitkreutz is looking forward to continuing to work with his young dog and hunt alongside his father while he completes his own Upland Slam. Glenn Obermier
For Glenn Obermier, hunting grouse has been a part of his fall season for the past twenty years, but when his son mentioned the new Upland Slam challenge, he knew he had to give it a try. Every year Obermier goes with a group of friends on a grouse hunting trip in Cherry County, and this year would be no exception. Greater-prairie chickens were frequently seen on these hunts, but he needed to make sure he added a sharp-tailed grouse to the vest this year. Although he doesn’t have any specific goals for the rest of the season, he is excited to continue to hunt and was out the following morning after completing the slam. “Pheasant population is up dramatically from what I have seen in previous years,” stated Obermier. We wish him, along with his family and friends, continued success throughout the season! Brad Snyder
When Brad Snyder’s friend told him about the Upland Slam, he thought this would be a great challenge that he believed they could do well in. Snyder has been hunting grouse for around 10 years, and started pheasant hunting at the young age of 14. But that didn’t mean this would be a walk in the park, even for an experienced hunter like Snyder. “There was the added pressure of trying to get the entire slam. The greater-prairie chicken and the sharp-tailed grouse being the hardest.” So, he headed out to Garfield county in pursuit of prairie grouse. Shortly after, Snyder found success in Furnas county for the second half of his slam. When asked if he would try again, Snyder commented, “Absolutely!” Ken Loth
Ken Loth has been an avid upland hunter for the past 45 years and was excited to be a part of the Upland Slam challenge. He headed out to Boone and Cherry county in early September with his german shorthaired pointer to pursue the first half of the slam. “Believe it or not my dog pointed a rooster pheasant in the sandhills. That’s the first time in 30 years I’ve seen that. A mile out after the hunt we saw six more on the road.” A seasoned hunter, when asked what the most memorable part of the hunt was, Loth replied “the ones I missed.” That’s one feeling every hunter can certainly relate to. With a long season ahead, Loth looks forward to continuing to spend his time in the field with his trusty bird dog right alongside him. Chris Varney
For Chris Varney, the Upland Slam just added to the excitement of a typical upland hunting season. As a regular grouse, pheasant and quail hunter, he looked forward to participating. After successfully completing the first half of the slam in Custer county, Varney went into opening day of pheasant and quail ready to finish the challenge. Hunting with a group of friends who knew Varney was participating, the pressure was on. “The pheasant came early and while the group shot some quail early, I actually didn’t get a shot at any till the last draw we walked.” Next up for Varney? Bow hunting for deer followed up with his favorite season, waterfowl.

Each hunter who completes the slam will be entered to win one of our great prizes from Pheasants Forever, including a YETI cooler, YETI tumblers, Hank Shaw cookbook and the grand prize – a Browning Silver 12-gauge semiautomatic shotgun. The grand prize drawing will take place at the Pheasants Forever State Habitat Meeting Feb. 9, 2019.

LINCOLN, Neb. – Hunters from around the country returned to rural Nebraska on Oct. 27-28 to partake in a co... 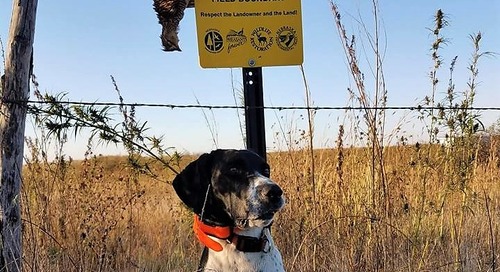 Hunting public lands. It can be a daunting challenge. And, it can be especially tough in a state like Nebra...