Phenology is a word that you may not be familiar with, but I am pretty sure that you’ve experienced it. Think about what season it is. Spring? Summer? Fall? How do you know it is that season? Phenology, that’s how, which can be defined as the timing of events in the life cycles of plants and animals. For example, you know that winter is waning when you see robins begin building nests or when Pasque flowers start blooming. Or later in the year, you know that fall has arrived at the first sign of foliage changing color. Animals and plants have a sense of phenology, too, and thus rely on cues from the changing seasons to survive.

Phenology is a key component to life on earth. Changing precipitation and temperature usually signal organisms to enter a new phase of life. In plants and trees, that includes flowering and leafing in spring, and leaves falling from deciduous trees in the fall. In animals, phases include hibernation, reproduction and migration. Many birds, for instance, time nesting and egg-laying so that insects will be available for their babies to feed on when they hatch. Insect emergence, then, is timed with the blooming of flowers, which insects rely on for food.

Scientists who study phenology look for the timing of events in relation to changes in the season and the climate, and phenology has been a major interest: Our global climate is undergoing a shift, which means the phenology of different seasonal organisms is also changing. Ecosystem services such as pollination and seed dispersal, regulation of pest species and soil quality are all affected by phenology, and if phenology is shifting from species to species, these services could be interrupted over time, or even lost altogether.

For example, scientists are finding that flowers are, on average, blooming earlier around the world, even here in Nebraska. New studies have shown that flowers are blooming around 40 days earlier than they did just three decades ago. While this may not seem like a big deal in itself, the trend could have cascading effects. Insects need time to develop before emerging; they simply can’t speed up their developmental process to catch up with flowers that are blooming earlier. If insects have no food, they die, and without insects, that’s bad news for the birds that feed on them.

Furthermore, as the temperature of the Earth rises, global seasonal trends show that climates are becoming warmer earlier in the year, and staying warmer later into the fall. As a result, changes in phenological events can have a significant impact on how humans interact with the environment on a daily basis: One example is in the food we eat. Common foods such as almonds, apples, melons, strawberries, chocolate, peaches and tomatoes require pollination by insects. If flowers are blooming earlier than pollinators are emerging, this could lead to severe declines in many of the foods we know and love.

One way to help scientists is to participate in a global project called Budburst. There, you can report when the plants in your garden, park, town or state are changing with the seasons.  Scientists can then use data collected through this community science project to predict how our climate and different ecosystems will change decades, and even centuries, into the future. For more information, visit budburst.org.

Repairs have been completed, and the Marina Bay boat ramp is open at Sherman Reservoir State Recreation Are... 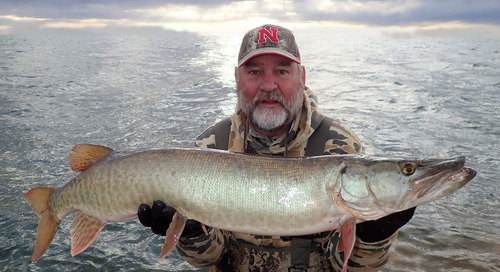 If you have been drawn into the addiction that is muskie fishing, you have a few stories to tell.  Most of ...