October means paddlefish snagging season below Gavins Point Dam for those who drew a tag.  I have not said anything about this year’s season, but I want to mention that I have heard some great reports!  From what I have been hearing, the catch rates have been very good, and fish of a variety of sizes have been caught.

I know a couple of guys who had tags this year, one of them his first paddlfish tag ever, and they had a fantastic weekend catching dozens of fish.  In fact, they posted a couple of videos on YouTube, so I am stealing them and showing them here:

Well done Brian and Brett!  Do not worry, no one will know who you are, your faces are covered.

You can see how big the fish were, and those were a couple they had to release!  All paddlefish between 35 and 45 inches, from the front of the eye to the fork of the tail, have to be released.  Those are the main broodstock fish for that population.

Gavins Point Dam is a barrier to fish movement on the Missouri River.  Paddlefish and a lot of other species of fish tend to congregate below the dam and thus that is, by far, the best area to fish for the paddlefish.

Let me make a couple of other comments about the paddlefish snagging season:

I have heard a few reports of tagged paddlefish being caught.  If you catch one of those fish we would appreciate knowing about it; scrape the algae off the tags and read the numbers.  If the fish are then released, please leave the tags on the fish.  I can tell you that jaw-tagged paddlefish likely were tagged in SoDakota.  It may take a little bit of work to chase down tag numbers and the history of those fish, but it can be done.

Speaking of fish from the Dakota reservoirs, yes, they do move downstream and yes, they do come through Gavins Point Dam.  Sometimes you will see some beat-up paddlefish that endured a wild ride through the dam, but believe it or not, they do that and live to tell about it.

There is also concern that invasive Asian carp are competing with paddlefish in that stretch of river below Gavins Point Dam.  We have research crews working on the Missouri River and specifically monitoring the health of the paddlefish population there, and that is a situation they will continue to watch very close.

I have heard no reports of lampreys this year, “Gasp”, Horror.

I did spend some time wandering the state with Omaha World-Herald outdoor writer, Larry Porter, back before his retirement.  On one of those adventures, Larry enlisted me to go along and “help” him fill his paddlefish tag.  That was no problem, Larry hooked his first paddlefish about ten minutes after we started fishing.  I got to handle one of the biggest paddlefish Larry caught, another fish that by regulation had to be released. On that trip, Larry also invited Jim McDonnell, a well-known fishing guide from Iowa.  Jim and I were very much interested in catching walleye, sauger and big white bass, and tried to get Larry to hurry up and tag a paddlefish so we could concentrate on that!  I spent a lot of time talking with Jim on that trip and picking his brain, loved every second of it, it was a great trip.

Outdoor writers seldom get pictures of themselves holding fish or game, so I am pretty proud of this one shot I got of Larry holding the paddlefish which he finally decided to tag. 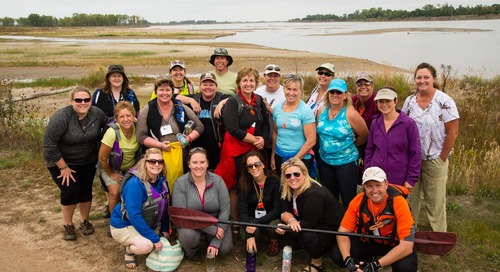 When do you know you’ve become an outdoors-woman? This question was posed to game and parks staff during th...