Yes I did.  I joined the thousands of bird hunters that took to the field the past couple of days to chase the cackle-birds and bobwhites that filled my dreams and thoughts in the days and nights leading up to that special October Saturday.  This won’t surprise anyone that has read any of my past preseason bird blogs (Rooster! Rooster!).

Once again I had a great weekend, too.  As you’ve likely read or heard the numbers for both ring-necked pheasants and northern bobwhite quail are as strong as they were last year and much improved over the previous few.  My observations the last two days support those claims.  Which continues to prove that when given access to the right habitat and favorable conditions these birds thrive.

Pulling up to the first field I was as excited as the three birds dogs whining in their kennels.  So were the three other hunters with me.  The cackles emanating from the nearby field didn’t help settle our nerves either.  At the appointed time, several minutes after legal shooting hours, we took our first steps into the 2016/17 bird season.

Our small French Brittany, Carrot, worked well as we moved down the hedge-line and into what little wind there was.  Minutes later she froze, gazing into the thicket.  The first birds of the young season broke cover not 15 yards in front of Logan and me.  It startled us both and the covey of quail made good on its escape – without a shot being fired.

Carrot worked some of the singles as we progressed down the hedge.  Shots were fired.  Excuses were given.  We hunted on and finally managed to bring down our first bobwhite of the season.  Which Carrot brought back proudly.

We then switched to the thicker cover ringnecks were finding more appealing that dewy morning.  The dogs did their thing and soon two were added to the gamebag.  Having heard cackles between us and the trucks we circled and arrived back at the vehicles about an hour after we had originally left them.

After a break, morning snack and review of the quick hunt we plotted our next effort and headed to a new destination.  Putting the plan into action we came across two flocks of prairie chickens and more roosters.  Some birds were taken, many more remained giving us optimism for hunts to come.

By lunch we were satisfied with the results and called it quits for the day as the temperatures climbed into unseasonably warm numbers.  Better to get in a nap and prepare for day two, when we got to do it all over again.

During the first two days of the season we hunted several public access areas.  We came across birds on all of them.  Being opening weekend, you bet we saw other hunters, too.  There was enough room for everyone to spread out and plenty of birds to justify the effort.

There is no better time than right now to pick up the shotgun and go bird hunting.  Whether it would be your first season ever or your first in a while, the birds are out there and you should be, too.

I’m just not sure I can wait an entire week to hit the fields again. 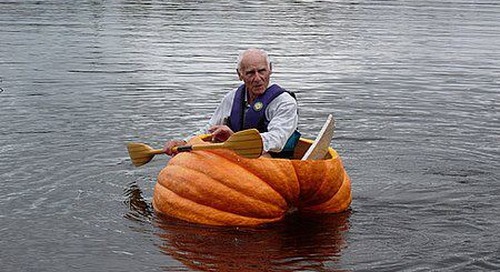 Today is Halloween.  I feel obligated to do a Halloween blog. Fishing kayaks have become very popular in th...

LINCOLN – Nebraska youth got to experience an upland hunt as adult mentors took them afield for the state’s...