Nebraska’s 155th Anniversary: The Story of My Pioneer Roots

They were immigrants who braved the unknown to carve out new lives in a strange new land among native inhabitants. They were about determination, perseverance, strong backs and an unwavering faith in their religion.

They never recognized the impossible. They were tough.

They fought and endured a Civil War. They loaded up their belongings and themselves in covered wagons and came here in search of a better life in which to claim land to farm, raise livestock, hunt, fish and raise their children. Along the way, they crossed wide rivers, endless windswept plains and large mountains. Once settled, they dealt with prairie fires, blizzards, tornadoes, drought, grasshoppers and more.

They rank high among the reasons to celebrate Nebraska’s 155th anniversary of statehood.

The story of the Murphy clan, and how they journeyed to Nebraska, is similar to that of other immigrants. And, it is rich, just like the soil on our lands.

The story actually begins when a young man named James Murphy, age 16, emigrates to the United States from County Limerick, Ireland in 1855 on a ship filled with other Irish immigrants. James and the others were looking for a life not inflicted with religious persecution, rebellion, poverty, war, penal laws, disease and famine as well as the possibility of owning land. The middle of the 19th Century brought an unparalleled human disaster to the tenant farmers of Ireland — the potato famine.

After landing on the East Coast, young James works as a blacksmith for a time in Philadelphia, Pennsylvania, a trade his father, Thomas, had taught him in Ireland, There, he eventually meets and marries his wife-to-be, Margaret.

Together, they would make their way with a group of other Irish immigrants to the area around Galesburg, Illinois and then moved to Chicago, Illinois where work was more plentiful. James plies his blacksmith trade there and also works on farms just outside the city.

Then, the unthinkable happens. The American Civil War breaks out in 1860. James continues working and Margaret gives birth to two children in the early 1860s – James, Jr. and Mary. In 1864, young James who knew horses well as a blacksmith, is recruited and enlists in the Union Army’s 5th Illinois Cavalry Regiment. He participates in skirmishes in the South, serves alongside African-American troops in the 3rd United States Colored Cavalry and falls under the command of Major General George Armstrong Custer in Louisiana in mid-July of 1865.

At the conclusion of the war, James travels back to Illinois from Texas with his regiment, is paid and discharged, and reunites with his family. The Murphy’s stay in Illinois for several more years as James works and money is saved. Two other children, William and Dennis, are born.

At some point, a decision is made by James to go west alone to the Nebraska territory where he heard free land could be obtained. He sets out on the long journey. Sometime during the late summer or early fall of 1867, James, on horseback, arrives at a Nebraska settlement called Forest City near the Elkhorn River just west and south of present-day Gretna in Sarpy County. The settlement, a lively place incorporated in 1858, is comprised mainly of Irish immigrants.

James inquires about land available, combs the area looking for some, does odd jobs for money and stays with acquaintances. His family, meanwhile, is still back in Illinois. The search for property though takes a while as land is being claimed at a rapid pace. Finally, he locates what he believes to be suitable land with good natural resources for building a home, getting clean water, raising farm crops and livestock, hunting wild game and comfortably surviving. He claims it, with official documents to be completed following settlement at a much later date.

The hilly, scenic land is in the Sauntee Hills which may be loosely deﬁned as a narrow strip of windblown Loess soil, interspersed with Dakota Sandstone and Pennsylvanian limestone. Inhabited by Native Americans for thousands of years, the Sauntee Hills overlook the Platte River valley, has spring-fed Bird Creek and its aquifer flowing through it and is not far off from Forest City or the original Mormon or Oxbow Trails. In this unusual geographic and historic area in western Sarpy County, you can ﬁnd large beds of prickly pear cactus, and long rooted yucca plants. Cedar trees have migrated into the hills in the last 30 years, but you can still ﬁnd many 200-year-old oak, walnut, linden, hickory and cottonwood trees.

Back to our story. Upon returning to Illinois, James and the family tie up loose ends, pack up everything they own and head west to Nebraska in a covered wagon. They undergo a treacherous Missouri River crossing in a raft but make it!

U. S. Census takers interview them on the land by August 30, 1870 living in a dug out or sod house. They begin homesteading activities on September 1, 1871. A log cabin is built, a stable and granary are constructed, a well is dug, and trees (pine, maple and chokecherry) are planted. Life is underway in a new land!

There were many rough trials and tribulations through the years, most notably the influenza pandemic of 1918-19 when the family never left the farm, an armed robbery that occurred on the land during the Great Depression in April of 1932 and the impact of the Dust Bowl storms in 1935.

Through bold actions and achievements, resilient generations would persevere and remain on the farm.

The farm is currently owned by my aunt Norma Hintz and other relatives from the Gretna, NE area. The old homestead site, referred to as “The Place,” is still standing on the property.

It continues to be managed, worked and enjoyed to this today!

Happy birthday to us! Thank you, great-great grandpa!

The post Nebraska’s 155th Anniversary: The Story of My Pioneer Roots appeared first on Nebraskaland Magazine. 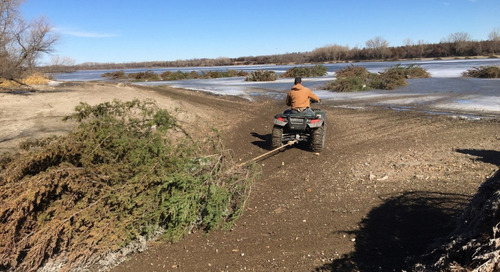 The water level at Wagon Train Reservoir south of Lincoln is down several feet right now.  We will be doing... 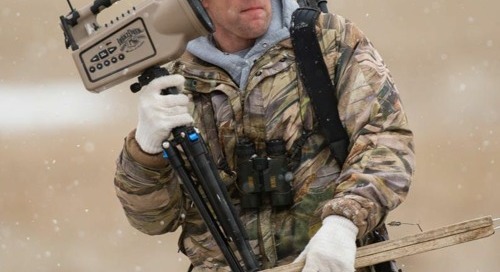 Cold temperatures does not mean there are no hunting or scouting opportunities. Kayla rejoins the Hunt NE c...