LINCOLN, Neb. – The Nebraska Big Game Society, which raises money through membership dues and its fundraising spring auction and dinner, donated $27,000 to the Nebraska Game and Parks Commission on July 13.

The check represented the sale of the Nebraska Resident Elk tag to the highest bidder. Additional funds raised are earmarked for other important Nebraska big game efforts.

“We are pleased to support the Nebraska Game and Parks Commission while fulfilling the mission of NBGS to ensure the future of big game and their habitat in Nebraska,” Hertzel said. “The group is making a presentation today of $27,000 from the high bid of the resident elk permit auctioned off this year.”

Hertzel said NBGS has raised and donated more than $681,000 to support big game research and conservation efforts in Nebraska since 2012. That included a $40,000 donation to Game and Parks in May for the purchase of elk tracking collars.

“Game and Parks is grateful for the support of the Nebraska Big Game Society in helping us fulfill our mission of stewardship of Nebraska’s wildlife resources,” Douglas said. “Hunters, anglers, and our partners, through their dollars, activities and passion, help ensure the sustainability of our fish, wildlife and natural resources for future generations of Nebraskans.” 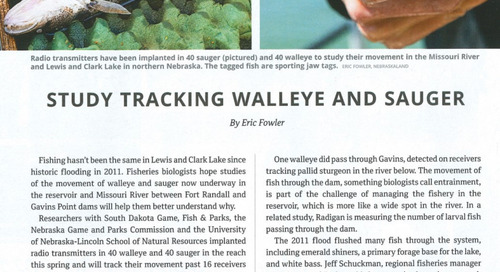 I want to point out some fisheries research work currently being done on the Missouri River in northeast Ne...

LINCOLN, Neb. – The Nebraska Game and Parks Commission will accept applications for a 2021 bighorn sheep lo...