LINCOLN, Neb. – Low oxygen levels have caused a major die-off of fish at Olive Creek Lake, according to the Nebraska Game and Parks Commission. The remaining fish population is suspected to be small.

The die-off was reported by the public and investigated by Game and Parks on Aug. 16. Game and Parks staff found extensive numbers of dead largemouth bass, bluegill, channel catfish, black crappie, saugeye and black bullheads.

Dense algal blooms in the lake over the past several weeks, combined with slight wind and wave action, resulted in low oxygen levels. Only the top several feet of the water contained oxygen capable of supporting fish.

Visitors to Olive Creek State Recreation Area would find a shore ringed with dead fish. Angling is not recommended since success likely would be poor.

Daryl Bauer, Game and Parks’ fisheries outreach program manager, said conditions for a continued die-off may exist and any fish currently remaining may be stressed.

An evaluation of the fish die-off and remaining fish population will be conducted later this summer or fall.

Restocking likely would not take place until 2019, since most of the fish being raised in state fish hatcheries are designated for other waters. 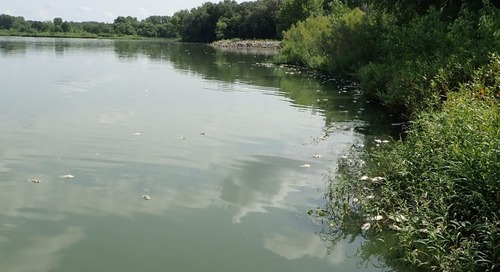 Gonna start this blog with a news release, like I often do, but then there is more to the story. . . . Majo...