By Leslie Reed, University of Nebraska-Lincoln

Elusive creatures of the night, bats fly silently and erratically in the dark. They hide in nooks and crannies and caves. Because of these ghostly qualities, humans often don’t realize when bats are nearby.

A University of Nebraska–Lincoln scientist is working with the U.S. Geological Survey, the Nebraska Game and Parks Commission and other federal and state agencies to use acoustic detectors to survey bat species and populations in Nebraska to identify where different species occur.

Christopher Fill, a research scientist with the Nebraska Cooperative Fish and Wildlife Research Unit in the Institute of Agriculture and Natural Resources, has served as the Nebraska coordinator for the North American Bat Monitoring Program since 2020.

“Many landowners don’t think they have any bats on their property, because they don’t see them,” he said. “I conduct bat acoustic surveys all summer, and I hardly ever see them. But if you set out acoustic detectors, you learn bats are out there — you just didn’t know it.”

As coordinator of Nebraska’s bat monitoring program, Fill works with about 100 Nebraska landowners and a crew of volunteers from Nebraska Game and Parks and the university’s Master Naturalist program to place bat-detecting acoustic equipment at over 100 locations across Nebraska. The sound-activated detectors identify the presence of bats by recording their calls, which vary by species according to frequency and pattern.

Bat calls normally are outside human hearing range, except when they’re frightened or angry. Fill said he’s also heard mother bats chirping to their babies in trees, used as maternity colonies during the spring and summer.

“For some bat species, several female bats will rear their babies together in a tree,” he said. “Sometimes as you walk by the tree, you can hear them chatting to each other with high squeaking noises, somewhere between a mouse and a bird.”

Fill, who has studied bats in Nebraska for almost 5 years, said about 13 bat species have been found in Nebraska. Most are tree-loving species found in the wooded areas of the eastern part of the state, but some of these also follow the Missouri and Niobrara river valleys into the upper Panhandle near Chadron and the Pine Ridge.

According to the monitoring program, bats are important to the maintenance of healthy ecosystems and, because of their longevity and sensitivity to changes in their environment, are considered to be important bioindicators for ecosystem health. They contribute to agriculture because they consume large numbers of insects during the growing season.

The most common species found statewide in Nebraska are big brown bats, eastern red bats, hoary bats and silver-haired bats. Three species of bats vulnerable to white-nose syndrome, a fungal disease discovered in North America in 2006, also occur in Nebraska: northern long-eared bats, little brown bats and tri-colored bats. Northern long-eared bats have been listed as a federally threatened species, while efforts are underway to designate all three species as endangered.
Nebraska has been part of the North American Bat Monitoring Program, which also covers Canada and Mexico, since 2015. Last year, Nebraska collected its fewest number of northern long-eared bat calls since the program began.

After spending most of his summer traveling to detection sites, Fill has completed this year’s fieldwork and now is compiling and analyzing data. Although bats remain active in autumn, researchers don’t want to interrupt mating, hibernation and migration preparations that occur in the fall.

More analysis is required before conclusions can be drawn. Analysis may additionally be hampered from an inability to sample a majority of sites in 2019 and 2020 because of historic flooding and the COVID-19 pandemic.

“The program standardizes the data collection process so that it’s uniform and comparable,” Fill said. “This allows researchers from across the country to get a better idea of bat distributions, trends and declines along with a better sense of how bats are doing. It’s not perfect, but bats are so difficult to study, it’s hard to come up with anything that would be.”

Fill supplements data collected via stationary detectors with mobile driving surveys using a detector attached to the top of a car, as well as occasional capture surveys.

“After sunset, we’ll drive a route between our sampling points, often along gravel and dirt back roads, to collect bat calls,” he said. “With this particular detector, we can see and hear the bats when they fly over the car.”

In a previous project in 2018 and 2019, Fill set up arrays of acoustic detectors in farm fields, prairies and wooded areas near Homestead National Monument outside Beatrice, Nebraska. In addition to tracking northern long-eared bats and white-nose syndrome, he developed “heat maps” that showed bats’ foraging patterns in different landscapes. He found bats are most active along the edges of fields and near wooded areas and streams, which may encourage farmers to retain those landscape features to maximize the insect-reduction benefit they receive from bats.  ■

Leslie Reed is the director of public affairs at the University of Nebraska-Lincoln’s Communication and Marketing Department. This is her first appearance in Nebraskaland Magazine.

The post Listening for Bats appeared first on Nebraskaland Magazine. 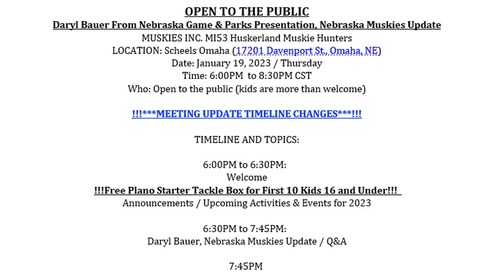 If you are a muskie angler or even if you just have a curiosity about Nebraska muskies, then I know where y... 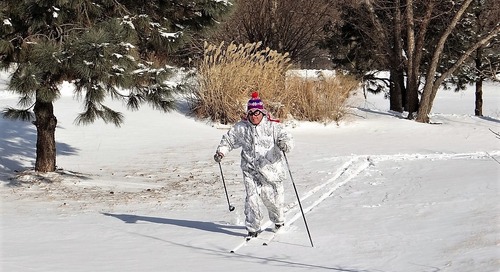 It’s winter. Snow has already fallen. It’s cold outside. Brrrr … But there is a no need to be a couch potat...