Paradise in the North

There aren’t many places you can pull your boat up on the bank at Lewis and Clark Lake. Water has eroded away hillsides ringing much of the lake, leaving cliffs that reveal colorful layers of Niobrara chalk and Carlisle shale, part of the geology of the area. Below those cliffs, more than 100 feet high in places, the shoreline is just too rocky. Still, boaters make the most of it, anchoring in the shadow of those cliffs when they want to hit the pause button and relax in the sun or go for a swim. The shoreline is one of the most picturesque backdrops you will see on any water in Nebraska.

There are countless boats on the reservoir on a summer weekend, but as Nebraska’s second largest at 15 miles long and 2.5 miles wide, there is plenty of room for those and more. Some boaters have unfurled their sails and are riding the prevailing winds across the water. Some are pulling kids on tubes. Some have their lines out, drifting or trolling for sauger, walleye, white bass or catfish, or casting for big smallmouth bass.

When the day is done, some will pull their boat into a slip at the Weigand Marina at Lewis and Clark State Recreation Area. The waiting list is long for slips that are leased seasonally, but a few can be rented daily. With four boat ramps, getting in and out of the water is quick and easy.

The marina is just one of the amenities found at the Weigand and the adjacent Burbach areas. Ten modern two-bedroom cabins sit on the lakeshore, with spacious patios and lawns overlooking the water. There are campgrounds, a swim beach, concession, playground and more. On most weekends in the summer, and a few in the fall, special activities are offered in the Weigand-Burbach area, including movie nights, hayrack rides and archery clinics, to name a few. The Nebraska Game and Parks Commission manages three other areas on the lake’s south shore – Miller Creek, Bloomfield and South Shore – all of which offer camping of some sort and boat ramps. In all, there are 250 sites, 150 with electrical hookups.

The South Shore area has more than 4 miles of trails open to hikers, horseback riders and mountain bikers and, in the winter, snowmobilers and cross-country skiers. The trails wind through the hardwood- and cedar-forested bluffs and remnant patches of native prairie above the lake, and in a few spots, take you to the edge of the cliffs for a sweeping view of the lake. A short trail is also found at the Miller Creek area.

The reservoir is a wide spot on the Missouri River, which forms the border between Nebraska and South Dakota on the northeastern edge of the state. It is formed by the 1.6-mile-long Gavins Point Dam, which was completed in 1955. Built and managed by the U.S. Army Corps of Engineers, the dam’s hydroelectric facilities produce enough electricity to power 68,000 homes.

Below the dam are more campgrounds managed by the Corps, as well as Lake Yankton, which recently underwent a project to remove rough fish and now provides excellent angling for largemouth bass, as well as some nice walleye and bluegills. The Nebraska Tailwaters area is another popular angling spot, with a chance to catch anything that swims in the reservoir and, in the fall, snag a prehistoric paddlefish. Above the spillway area is the Corps’ Lewis and Clark Visitors Center. The Gavins Point National Fish Hatchery, operated by the U.S. Fish and Wildlife Service, is also located below the dam.

The reservoir is named for the Lewis and Clark Expedition. Members of that party camped at three locations along this reach of the Missouri River on their way to the west coast in 1804, and at another on their way downriver two years later.

Once you see Lewis and Clark Lake, you may not want to wait two years between visits to this scenic gem.  ■ 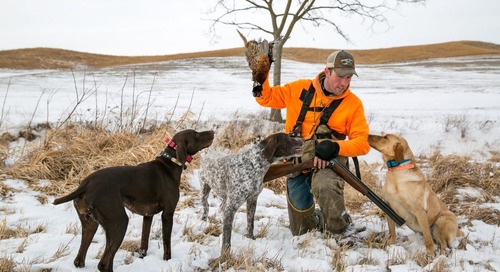 From Hi-fi to Hunt Guide

Aaron Schroder lives in Lyons, Nebraska, with his wife, four dogs and two horses. He drives a truck, apprec... 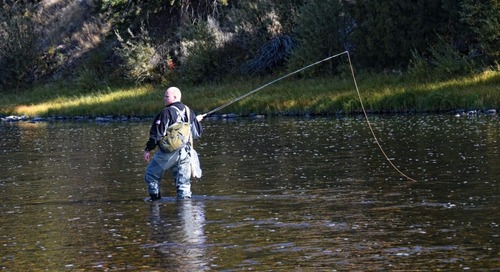 When a roadside bomb exploded next to the vehicle David Landon and his fellow soldiers were riding in on a ...