I suppose it is not really fair to blog about ice fishing when most waters in Nebraska are pretty much liquid now.  However, even as I write this there might be a place or two in the state where you can still get on the ice and catch some fish. . . just make sure you are very, VERY, careful.

However, as I will always tell you, you have to make sure the ice is safe EVERY TIME you walk onto it, and that is especially true on early and late ice.  The only way I know to safely do that is by religiously using a spud bar.  In fact, I do not know that I even want to refer to that tool as a “spud bar” or even “ice chisel” anymore.  For emphasis, I believe it should be called an ice safety tool, and if you ice fish you absolutely should have one!

Sure, you can drill holes and check ice thickness and quality as you venture out, but the problem with that is you are standing on the ice before you are drilling it.  You have already gone a step too far if it is not safe.  On late ice this past couple of weeks, I once again was convinced of how valuable that ice safety tool was–every step of the way, using the “spud bar” like a walking stick, I instantly knew the quality of the ice in front of me.  In addition, throughout the day, especially with unseasonably mild, warm afternoons, every hour or so, one of us would take the ice safety tool and patrol our fishing area making sure the ice was still safe.  We knew when it was time to move to another area, we knew when it was time to get off.

Knock on wood, I have never gone through the ice, even fishing it as early and late as I have.  The only way I can do that with peace of mind is by using my “spud bar” ALL THE TIME.

As the weather warms and the ice begins to melt, the water under the ice starts warming too.  I have a digital thermometer with a long lead that I have used on the ice for several winters now.  You would be shocked if you knew how warm that water is under the ice late in the season–it is often well up into the 40’s F.  Evidence of that is that the ice starts melting from underneath too.

And, the fish activity really picks up with the warming water!

My son and I both iced some gorgeous, big, sandhill bluegills.  No ice fishing season is ever complete until I pull at least one 10-inch or larger sandhill’s, bluegill through an ice hole.  Mission accomplished again this year! I love those big ‘gills!  Nebraska is blessed to have the sandhills lakes that are capable of easily producing those fish.  They are a fish that are more rare than 50-inch muskies.  They should be treated like 50-inch muskies!

Some perch and bass provided variety and additional excitement: For you hard-core “internet scouts”, those of you studying my pictures to see where those fish were caught and what they were caught on, I know you are doing it, let me make it a little easier for you.  Wanna know what bait?  Look close at this picture. Yep, it was warm enough that the ‘hoppers were crawling out up in the grass.

The fish ate ’em.  Spent a few minutes collecting bait before we started fishing each morning.

We are claiming to be the first to ever catch fish on ‘hoppers, through the ice!

As I said, we literally monitored ice conditions by the hour.  And, as I said, we moved when we had to, eventually walked off the ice one evening knowing that would be the last time for that relatively shallow sandhill lake.

But, ice conditions vary from one waterbody to another.  Relatively small, shallow waters freeze first and thaw first.  Larger, deeper waters take longer.  So, we changed locations and got in another day and morning on the ice.

My cousin Robin joined us for an afternoon and a day.  My son and I are both geared-up with depth-finders, jigging rods, the whole “nine yards” for many ice anglers these days.  My cousin is still a little more old school than that, but Daniel and I told him how deep we were fishing and where we saw fish coming through.  Robin took that information, had Daniel spot his baits on his depth-finder, and then patiently sat there and fished “blind”, without a depth-finder, for hours.  The bite was slow for all of us, but darned if my cousin did not out-fish us.  He was particularly happy when he iced a channel cat. My son and I both briefly hooked big fish, a couple more catfish we suspect, but ended the day without hooking up with anything bigger than a bluegill and a couple of crappies.  That was frustrating, but overall we were very satisfied with our last ice trip of the year, and we ALWAYS enjoy spending time with my cousin. As I write this now, since we were on the ice, some parts of the state once again received lots of snow and some cold weather.  That is why I said at the beginning of this blog post that there still may be some spots in the state where a person could carefully get on the ice and catch some fish.  I have fished late ice in Nebraska as late as the middle of March.  But, I am betting for almost all of us, our ice season is done.  I spent a lot of time on the ice this winter, as much as I possibly could; fished a variety of waters in several parts of the state and caught some good fish.  But, I have to say this last ice trip was the best of them all, late ice rarely disappoints, and I cannot wait to do it again!

As we left the ice the last evening, driving to my cousin’s place back in town, way off to the south, we saw a couple of lightning flashes from a late winter, rogue thunderstorm–pretty good way to end an ice season. LINCOLN, Neb. – Numbers of sandhill cranes on the Central Platte River during the spring migration typicall... 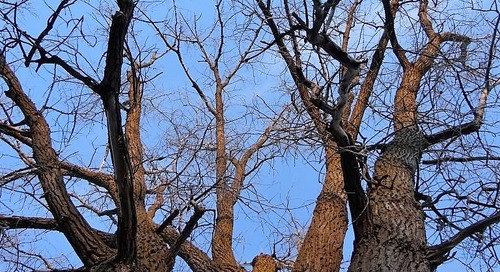 A Fan of the State Tree

As Nebraska celebrates its 150th year of statehood, an iconic, representative symbol of the state is the of...