Lake Yankton is the small lake right below Gavins Point Dam.  It is also known as Cottonwood Lake and is actually border water between Nebraska and South Dakota.  With Lewis & Clark Reservoir and the Missouri River adjacent there are lots of fishing opportunities in the area, but Lake Yankton and its adjacent camping has always been very popular with anglers.

The last time I blogged about Lake Yankton was to inform folks about the rotenone renovation that was being done there, Lake Yankton Renovation.  The great flood of 2011 resulted in an invasion of unwanted species into Lake Yankton, mostly Asian Carp.  The result of that invasion was a fishery dominated by unwanted species, which besides offering reduced fishing opportunity also resulted in poor water quality and aquatic habitat.  Well over 90% of the aquatic community was dominated by Asian Carp, Lake Yankton Renovation, Postscript, and here is what it looked like: The renovation occurred in September of 2014.  At that time, water clarity was less than 6 inches and there was little aquatic vegetation present.  Other than unwanted rough fish there were few other aquatic organisms or wildlife using the lake.

That was less than two years ago.  Recent observations from pointy-headed Nebraska fisheries biologists found that current water clarity at Lake Yankton is more like 7+ feet, aquatic vegetation is thriving and so are the crayfish and other “bugs” in that habitat.  Waterfowl were back en masse including even some Loons!

What about the fish?

Re-stocking started promptly in the fall of 2014 with Largemouth Bass and Bluegills followed by Walleye, Black Crappie and Channel Catfish the next year.

Did any of them survive?

Well, frame nets were recently packed with more than 95 Bluegills per net and electro-fishing caught over 380 Bass per hour!  Lake Yankton is absolutely packed with fish!

And they are looking pretty good! Yes, that is what a Bluegill that was only a couple of inches long can look like less than two years later when it has clean water, ideal habitat conditions, and no Asian carp or other unwanted competitors.

It even looked good enough that a fisheries biologist is inclined to break out the fly rod on his lunch break! “Creating Lunker Fish and Lasting Memories” is one of our mottoes around here and I believe we are well on our way again at Lake Yankton.

However, I want to offer one word of caution:  As I mentioned the Missouri River is not much more than a “stone’s throw” from Lake Yankton and there are a lot of folks who like to fish there, both waters.  I also know that the temptation is great for some of those folks to catch a Smallmouth Bass, White Bass, big Catfish or “I-do-not-know-what-this-is-but-let’s-haul-it-over-and-throw-it-in-Lake-Yankton”.  That “bucket biology” is illegal and has ruined more than one fishery over the years.  I have already heard one report of species being observed in Lake Yankton that were NOT stocked there.  No, that does not seem like much, but the more species that “creep” in, the more that fishery will turn into a little bit of everything and a whole lot of nothing.  Do NOT transport and release ANY live fish into any public waters, and if you see anyone else doing it, the Nebraska Wildlife Crimestoppers phone number is 1-800-742-7627, CALL IT! 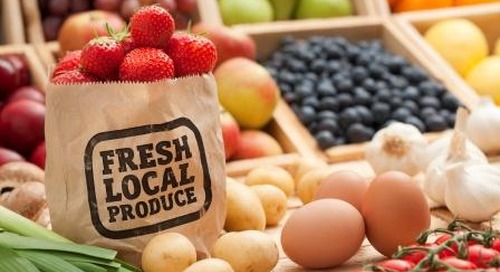 What is a locavore? A locavore is classified as any person that chooses to utilize the goods and produce th...