Noticeably absent this year has been our kestrel cam.  Technical technological realities forced us not to provide our streaming video originating from inside their nest box this year.  The nest box is located on the north side of our headquarters building here in Lincoln.  Even though I am an NGPC insider, I also don’t have access to the video feed.  I know the adult kestrels have been around and presumably nesting, but I have not had any indication of how things have been going for them.  That changed this morning when a co-worker, Jeff Blaser, directed me to a kestrel fledgling in a shrub outside of our building.  Even though it was dark outside following this morning’s rain, I was able to capture a picture of the youngster. There are likely other fledglings on our grounds and/or in the nest box close to taking their first flight.   It is nice to see that they are successful again this year even without witnessing it on the internet.  As I stated in the previous post, we hope kestrel cam will return next year.

Until then, good birding! 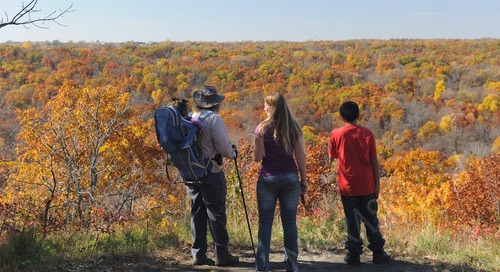 You may have already started noticing the sound of happy songbirds outside your bedroom window as you wake ...

LINCOLN – Many of Nebraska’s habitat programs will get a boost from recent Conservation Reserve Program (CR...