Jump at the Chance for Bullfrog Season

It is a season that opens at 12:01 a.m. on Tuesday, August 15th. It is an unusual season, but one that reeks of adventure, challenge and tremendous entertainment value. And, trust me, this is season that will create memories and stories like no other!

I know what you’re thinking at this point. Why would any sane, rational person trudge through backwater areas at night, risk getting bitten on the legs by creatures that you can hardly see, and getting extremely muddy, slimy and nasty. Why?

Stay with me here.

Simply put, the legs and other meat of bullfrogs are definitely worth the effort to catch them! Granted, most of the meat on a bullfrog is the hind legs but you can eat other parts, too! Bullfrog legs and meat are nutritious, flavorful, tender, juicy, delicious, and no, they don’t taste like chicken! They are far tastier!

This time-honored, late-summer/early fall outdoor pursuit is also a wonderful way to introduce kids to an aquatic environment. Catching frogs by hand, hand net and hook and line, is super exciting, since kids can get real close to their quarry. The bullfrogs can be caught and released, too! After all, don’t most kids love to chase after and attempt to grab a big frog that is jumping and splashing around the water?

Over the years, I have enjoyed trying to catch bullfrogs with friends and family in late summer at night in Nebraska! In high school, I even took a couple dates out for after-dark bullfrog expeditions! Believe me, those dates were far cheaper than pizza and a movie!

And, get this: Coming up on August 21st during the low light before and after total solar eclipse, I am planning to look for bullfrogs amid the cattails on my brother-in-law’s lake southwest of Lincoln, NE.

Bullfrog hunting is really a misnomer here in the Cornhusker State. Yes, there is a season on bullfrogs which runs from August 15 through October 31. However, bullfrogs are aquatic creatures (amphibians) and you need to have a current, valid Nebraska fishing permit in order to take or attempt to take them.

Research has been done on bullfrogs and bullfrog harvest in Nebraska for conservation purposes and the regulations (also found in the Nebraska Fishing Guide) are in place to keep bullfrog populations healthy and renewable.

The largest frog in Nebraska, the North American Bullfrog (Lithobates catesbeianus), is found in many aquatic habitats statewide. The bullfrog is almost always hanging out near some source of water such as a lake, pond, reservoir, river or marsh. Warm, still, shallow waters with a lot of aquatic cover, vegetation and algae favor bullfrogs by providing suitable habitats for their food, growth, reproduction and escape from predators. Look for areas with cattails, willows and young cottonwoods. Bullfrogs are most active at dawn, dusk and nighttime in these areas. They like to move during humid, rainy evenings. Listen for the male bullfrog’s unique call which is deep, loud and unmistakable. It is a distinctive low-toned bass-like call, (sounds like a low “Ru-u-umm – Ru-u-umm”).

Spot the frogs on land, keep the light directly on them so they’ll freeze in position, and then ease in close enough to catch them with a net or even by hand.  Be careful and try to approach low from the blind spot of the bullfrog located in the center of the back of its head. Be sure when you commit to catching one, you are fast and firm with your grip. Hold the bullfrog by grasping around the “upper thighs” with its legs together. Keep in mind that bullfrogs can easily slip out of hands due to their strong hind legs and slippery skin!

The Cooking of the Frog Legs

The consistency of bullfrog legs is best described as a cross between sweet chicken-wing meat, and flaky white fish. They have no fat on them. The biggest challenge with cooking frog legs is the same one that’s common to most seafood preparations, namely overcooking. There a several different ways to cook frog legs after washing them off with cold water. Some folks simmer them in white wine, olive oil and garlic. Here’s one of my favorite recipes.

FACT: Amphibians, such as bullfrogs, are an indicator species of a clean environment.

The post Jump at the Chance for Bullfrog Season appeared first on NEBRASKALand Magazine. 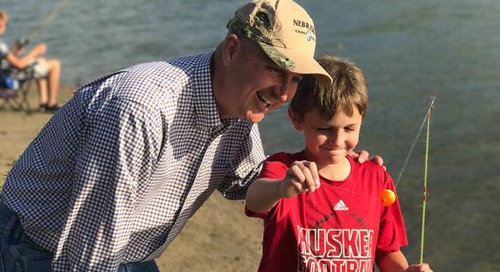 We hosted a Family Fishing Night at Holmes Lake here in Lincoln last week, and Governor Ricketts was able t... 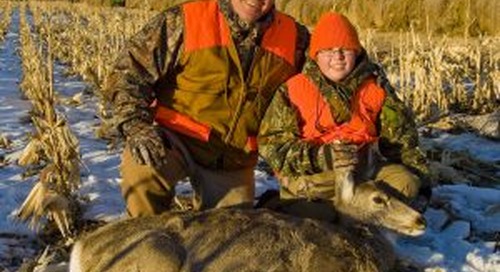 Every hunter I know is an ambassador of our sport and our outdoor heritage.   Some realize this daily while...