Home » NEBRASKAland Magazine » It’s May – where are the warblers?
× Share this Article

It’s May – where are the warblers?

Birders wait all winter for May to arrive because spring migration peaks during this month.  Among the many avian highlights are the warblers.  Warblers are small songbirds and there are 30+ species that regularly arrive in Nebraska in spring, primarily during May.  Some, like American Redstarts and Yellow Warblers, breed in our state while others, such as Magnolia and Chestnut-sided Warblers, are headed farther north and are only passing through Nebraska.   A few warbler species are nondescript, but other species are among our most stunning and colorful birds.  Many species are also notable songsters.  Warblers make May special.  However, May 2017 has not been living up to expectations on the warbler front even though lots of birders have been out and about. Even at the big Nebraska Ornithologists’ Union meeting in Auburn this past weekend, where dozens of birders scoured birding hotspots in southeastern Nebraska, the warbler numbers and diversity was, well, underwhelming.  Has it really been a slow year?   Sometimes the past becomes idealized and maybe this spring hasn’t been that bad?  To answer the questions at hand, I’ll use data from eBird.org.  First, I’ll take a look at the number of reported individuals of selected uncommon warbler species in Nebraska for the springs of 2016 and 2017.  Since May is not over yet this year, I’ll only use reports up through 22 May for both years.   Also, as a disclaimer, these are rather crude counts where the data have not been thoroughly reviewed and vetted.  I did my best to avoid double counting reports submitted by multiple observers, but take everything with a grain of salt.  Even so, as can be seen in Figure 1, below, the difference between 2016 and 2017 is striking. Except for Bay-breasted Warbler, which hasn’t been reported on eBird in 2017, the other four species are down in 2017 by about the same amount (approximately 80%!!!!) from their 2016 totals.  This is somewhat interesting as I expected there to be much more variation.  Another metric that could be helpful in answering the questions are high counts for some of the more common warblers.  Figure 2, below, shows high counts for 2016 and 2017 for selected species.  Data, once again, are from eBird. All the high counts for 2016 are less than the reported high counts for 2017.  Once again, the magnitude of the decline is relatively consistent among the species evaluated.   All the birders that have jumped out of bed before sunrise to chase warblers the last few weeks already knew this was a subpar year, but these data really show this to be case.  I’m not really sure what the explanation is for the poor showing this year.  Since the drop in numbers is not restricted to just a few species and is relatively consistent across the board, the source of the decline is likely something large scale rather than something acute.    We have had a series of powerful storm systems that have had, at times, strong westerly winds associated with them.  These storms possibly kept many warblers a little farther east this year.  Our friends in central Iowa seem to be finding plenty of warblers this year (and we know they are not better birders Spring migration is waning, but there still are a few more days left and just maybe there will be a late wave that salvages the year.  Otherwise, it is a long wait until next spring (but there are plenty of other birding opportunities to enjoy until then).  As usual – good birding!

The post It’s May – where are the warblers? appeared first on NEBRASKALand Magazine. 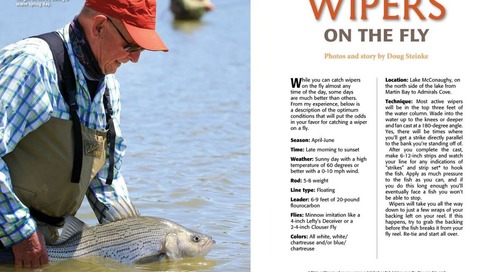 If you are a subscriber to NEBRASKAland magazine you have already seen this, but in case you have not I wan...