Home » NEBRASKAland Magazine » It Is All About the Eatin’!
× Share this Article

It Is All About the Eatin’!

No matter how you define it, we are now in the fall season.  There are no calendars in nature; seasons gradually morph from one into another.  Below the surface of our Nebraska waters, fall started weeks ago.

I know folks are busy with a lot of activities in the fall, and many of them will reach for their sticks & strings, scatter guns, and smoke poles rather than fishing poles.  Just know that fall provides some of the best open-water fishing of the year.  I love it!

There are many reasons why fall is one of my favorite times to be on the water, but the biggest reason is it simply is one of the best times of the year to catch big fish, big specimens of a variety of species.  Fall is a good time to pursue big fish because they feed heavily in the fall–there is a long winter coming, and they need to get ready.  In addition, for many species, they are already beginning to develop next season’s eggs and milt and need even more energy reserves for that.

Even as autumn waters cool, fish remain relatively active and feed heavily.  That is in contrast to the spring season when cold water and reproductive behavior also drives fish behavior of many species.  Daily activity routines in the fall revolve around one thing–finding enough prey to gain weight.  It is all about the eatin’!

Other than spawning seasons, finding enough prey to eat and grow is the primary driver of fish behavior most of the year.  Knowing that I am always thinking of fish location and behavior in terms of predator/prey dynamics.  What are they eating?  Where is that prey located?  Where is the greatest concentration of prey?  That is my over-simplified reply to every fishing situation; the first challenge is finding fish and where their prey is, there they will be.  That is most true in the fall.

So, how can that be applied on Nebraska waters?  Find the prey, and the fish we seek, especially predator fish, will be nearby.  Let me give a few examples: Our larger reservoirs, mostly irrigation reservoirs, are entirely different habitats and most of those waters have very little submerged aquatic vegetation, especially with summer drawdowns.  However, those waters are no less productive and are full of literally millions of young-of-the-year open-water baitfish like gizzard shad and alewives.  The abundance of those oily, spineless, delectable snacks make for well-fed and difficult-to-catch predator fish during the summer.  In the fall Nebraska reservoirs are still full of an abundance of those open-water baitfish, but abundances are less than their summer peaks.  That and predator fish on the feed make fall a better window for catching fish.

In general, baitfish and predator fish movements in large reservoirs will be towards deeper water as fall progresses.  Baitfish tend to school up and move to deeper waters where water temperatures are more stable.  However, in early fall, and even on warming trends in late fall, there can be baitfish movements into warmer, shallow water.  Big predators follow.

If you are fishing from a boat, your depth-finder will show you where the baitfish schools are located, and likely there also will be some marks of big fish there too.  If you are not fishing with that technology, use your eyes.  Baitfish flipping on the surface or even the presence of migrating gulls can tip you off to baitfish concentrations with monsters lurking nearby. Leopard frogs spend much of the summer in wet meadows and marshy habitats.  As the weather cools, those froggies migrate back towards larger, deeper bodies of water where they can spend the winter on the bottom of the “lake”.  In some places, especially on warm fall evenings, you may notice concentrations of those frogs along shorelines.  You can be sure if you notice them, so do other predators.  In fact, predator fish will even scoop those hibernating frogs off the bottom underneath the ice.

Look along shorelines or beaches adjacent to marshes or wet meadows.  If you see even a few frogs hopping along the shoreline, fish it!  The frogs themselves will work as bait, but it usually is not imperative to “match the hatch”.  Any artificial bait that can be fished in relatively shallow water nearshore may get bit and bit big. I am a huge believer in big baits = big fish.  That is especially true in the fall for a couple of reasons:  First, the natural baitfish have grown all summer long and are larger.  Secondly, with the need to take in as much energy in the fall as possible, fish can gain more of that energy by eating large prey items.  I am telling you, most anglers fish too small, way too small.  Whatcha skeered of? Another reason I love fall fishing, besides the big fish, is that those fish bulk up as the fall progresses.  By late fall, they will be in great shape, fat for their length, and beautiful!  They may look a little “racy” coming out of summer, but they look like tanks later in the fall!  Love ’em!

Yes, my son catches all the skinny ones!

The post It Is All About the Eatin’! appeared first on NEBRASKALand Magazine.

LINCOLN, Neb. — Youth over the age of 11 who have successfully completed hunter education are invited to ta... 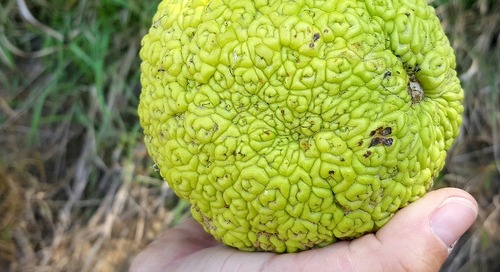 Say what? Nebraska has oranges? Well, no, not really. But, kind of. Osage orange isn’t an orange though it ...