In Pursuit of the Blue Dart

As a youngster, I cut my teeth duck hunting on small marshes in northwestern Iowa. Before the days of fancy decoys, acrylic calls, robo ducks and all the rest of modern-day technology, I would not sleep just so I could get to my favorite duck “hole.”

It was there that I experienced my first encounter with this majestic bird that I would later term the “blue dart.” Although it’s been over 40 years since I harvested, or at least tried to harvest, my first teal, I can still recall it like it was yesterday. In early fall of 1977, my older brother, Tim, dragged me to places in the dark that I never thought existed. That morning on opening day, we set out for what would become our favorite hole.

They came in bunches, fast and furious and darting by like mosquitos on a hot summer night. Before I could say a word, my brother said “take-em.” I did and missed, and missed again. My brother loved to joke about that day and my inadequate shooting. I was neither prepared nor experienced in the art of teal hunting, but I knew from that day forward that besides the mallard duck, they would be my favorite pursuit.

I’ve hunted teal on small marshes, large reservoirs and river systems. Here are some tips for stepping up your game when going after teal.

Find Vegetation and You Will Find Teal

You don’t need much water to find teal. They thrive in flooded grass and marshland where food and resting spots are plentiful. Spend a day or two scouting in late August before the teal season opens and you’re likely to find birds. The Rainwater Basin wetlands scattered throughout Nebraska provide wonderful teal hunting opportunities. Although teal prefer marshes, they will also frequent river systems that have vegetation.

Take a Kid With You

Teal are the perfect education tool for the young hunter. The weather is nice and they tend to decoy almost to perfection with little to no expertise. And since the majority of teal are done moving an hour or two after sunrise, there is no time for the youngster to get bored. Bring plenty of shells and mosquito repellent, though. Fighting off bugs in early September can be an experience killer for the young hunter. One thing I certainly recommend before the hunt is to practice shooting clay targets to prepare yourself for the quick, darting birds.

Let’s face it. Teal, particularly blue-winged teal, aren’t smart. They are the non-conformist of the waterfowl world, breaking most rules that apply to most species of ducks. Gear yourself with a spinning motion decoy, a half dozen decoys (hen mallards will do), and you’ll be in business. There are teal calls available, but quite frankly, you won’t need them. And if you do use them, use them sparingly when birds are moving away or on the
corners.

No fancy blind is needed either. A bucket surrounded by some grass or cattails is all you need for concealment. If they want in bad enough, you can do a lot of things wrong and still not screw it up. Don’t forget to bring your retriever here. These small birds are hard to find in grassy areas.

Teal migrate early and fast. Most blue-winged teal have moved through the Central Flyway by the end of September. One dip in temperature, followed by a northwest wind, can send them packing in a hurry. Coupled with hunting pressure, the teal season can be a short one. Time your hunts based on temperature and fronts. However, green-winged teal can be found as late as November. A smaller bird that tends to travel in big bunches can provide some mid-season fun. I’ve found them on larger bodies of water and river systems as late as mid-December.

I love to eat wild game. That has always been a rule I live by. If you are shooting the game, you are preparing the game and you are eating the game. My 15-year-old daughter understands this rule, too.

Not many ducks eat better then teal. If you’ve had it cooked to perfection, you know what I’m talking about. Since most of these birds are taken when the temperatures can be hot, make sure you care for them in the right way after harvest. Move them to a cool place as soon as possible. And because they are such a small bird, overcooking can happen easily, particularly when grilling.

My favorite recipe is quick and easy. Clean the birds and remove the breast meat. Season them liberally with salt and pepper, and then wrap with a thick piece of bacon and jalapeño. Use a toothpick to keep the bacon attached to the meat. The fat from the bacon helps protect the lean piece of teal from burning and it provides great flavor. My wife thinks this type of waterfowl tastes like a beef filet.

Not much compares to the memories I have from those early days hunting teal. With most seasons opening in October during the hunting days of my youth, often teal had already migrated through by the time you could start hunting. Now, with most states offering a teal season in early September, the opportunities to harvest teal are plentiful. It’s a great opportunity to dust off the rust from the long off-season — but be prepared for some quick and fast shooting. More than once the blue dart has humbled even the best of wingshooters.  ■

Todd Mills is a former Avian-X and Mossy Oak pro staffer who divides his outdoor time between hunting waterfowl and turkeys. Doug Steinke is a professional hunting and fishing photographer from Grand Island. To see more of his work, visit dougsteinke.com.

The post In Pursuit of the Blue Dart appeared first on Nebraskaland Magazine. 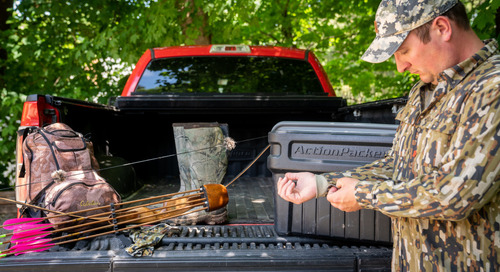 A No-nonsense Approach to Scent Control Besides Nebraska farmers, no group in the state frets over the weat... 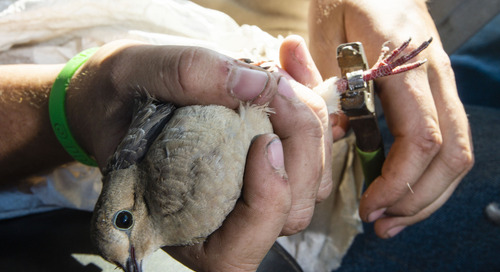 A nationwide mourning dove banding program has been helping biologists monitor population trends of the spe...