Nebraska has a banana.

If you are not familiar with the “Husker banana” as it is also known, the pawpaw or common pawpaw is an oblong-shaped fruit, yellow-green to brown in color, averaging the size of a standard supermarket potato. It produces the largest edible fruit indigenous to North America and is the hardiest member of the custard-apple family.

And, guess what? In Nebraska, the highly aromatic, sweet-smelling fruits ripen about now (late September or early October), if not earlier in September. Like bananas, they have a narrow window for harvesting since they ripen quickly and subsequently have a short shelf life. Fully ripe pawpaws last only a few days at room temperature, but may be kept for  a week in the refrigerator. A reliable test of ripeness is a slight softening of the fruit, similar to peaches.

The inside of the fruit is a creamy, custard texture, varying in color from creamy-white to yellow-orange. Its rich taste is most commonly described as a blend of banana, mango and vanilla custard with touches of papaya and pineapple. A ripe pawpaw can be eaten right off the tree. Just slice, remove seeds, squeeze and slurp. Please know that the fruit, though edible, may cause skin irritation and gastrointestinal upset in certain folks.

The pawpaw, or Asimina triloba, is a native deciduous tree to Nebraska, and grows wild in the open woods and ravines of the Missouri River bluffs in southeastern Nebraska. It is the only species of the mainly tropical and subtropical family Annonaceae that thrives in a temperate climate. The pawpaw is a small tree actually, about 15-30 feet high and about 8-10 feet wide. It has large leaves 10-15 inches long and 3-5 inches wide that can be rusty yellow to brilliant yellow in the fall.

The pawpaw contains several brown-black seeds about 1/2 to 1 inch in diameter embedded in the soft, edible fruit pulp.

Often appearing more like a bush than a tree, with fruit found singly or in clusters similar to bananas. It doesn’t self-pollinate, so other pawpaw plants need to be in the vicinity for it to produce fruit. The pawpaw does grows in patches, colonies or loose groves where there is shade and some sunlight penetration in the understory of oak-hickory forests that have primarily moist, well-drained soils.

According to research done by Kentucky State University’s Cooperative Extension Program, the pawpaw is a superfruit when it comes to nutrition. The skin is thin and contains a copious amount of Vitamin C. The pawpaw has a higher amount of protein than the banana, apple or orange. It also has higher concentrations of most vitamins, minerals and essential amino acids. Add antioxidants to the mix and you have a quite the nutritious piece of fruit!

The pawpaw fruit is used in pies, cookies, breads, cakes, barbecue sauces and ice cream, where its creamy, custard-like flesh compliments spices and balances flavors. Pawpaw can be substituted in many banana-based recipes. The pulp of pawpaws is now being employed by some micro-breweries for making beer.

The wild fruit is consumed by a variety of wildlife such as opossums, squirrels, foxes, raccoons and birds. The Pawpaw is also the host plant for the caterpillar of the Zebra Swallowtail butterfly, which eats its young leaves.

From a historical perspective, the name pawpaw is said to have originated from the Arawakan name of Papaya, an unrelated tropical American fruit.  In 1541, the expedition of conquistador Hernando de Soto recorded Native Americans growing and eating pawpaws in the Mississippi Valley. The members of the Lewis and Clark expedition ate pawpaws for pleasure, and, for a period of time in Missouri in 1806, subsistence. John James Audubon depicted yellow-billed cuckoos on a pawpaw branch. Our early American ancestors enjoyed pawpaws for centuries. Settlers savored pawpaw, often the only fresh fruit available nearby, even though they had to clear some pawpaw trees to create farm land.

So, there is such a fruit as a pawpaw that has been utilized as food for hundreds of years and many of us sang about as children.

Way down yonder in the paw-paw patch … Pickin’ up paw-paws; put ’em in a basket …. 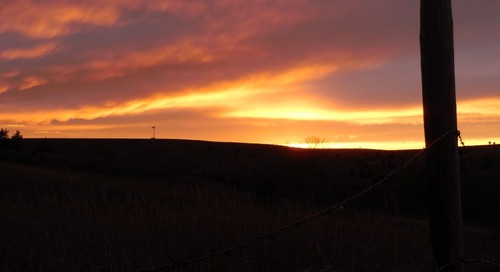 I have a confession to make:  I stole an issue of Reader’s Digest from my mother-in-law.  Even worse, I sto...