How to Hunt Nebraska’s Wild Turkeys in Winter

I believe hunting the wild turkey (Meleagris gallopavo) in the various seasons makes you a better, more knowledgeable, well-rounded turkey hunter and outdoor enthusiast because you gain intimate knowledge of the bird’s behavior.

I know what you’re thinking. What kind of crazed hunter sets up for wild turkeys in the frigid, snow-covered landscape of a late December or January day in Nebraska, right? These birds are in their larger winter flocks and require a feat to get near.

After all, a big, cold-weather flock of wild turkeys holds a lot of wary, vigilant eyes and acute hearing capabilities. Some of these birds have either been spooked by humans or other hunters. Whatever the case may be, wild turkey flocks present fun, hunting challenges and tasty rewards in late December and January!

Plus, like other forms of hunting, turkey hunting is a safe and responsible way to enjoy the great outdoors in a socially distanced manner.

So why wait for spring to hunt turkeys? There are many positives for hunting North America’s largest upland game bird this time of year.

A turkey hunter may be able to get access to private lands that have not been available in the fall because of other hunters pursuing game like deer. Public hunting lands are also not receiving an overwhelming amount of traffic at this time. There are not many folks, if any, hunting wild turkeys in late December or January. That quite possibly could be because of the sometimes brutally cold and snowy weather, or the fact that they are hunting other game species or it simply might be because hunters have yet to discover this opportunity. Keep in mind the birds are also much easier to spot and hear from a distance due to snow cover blanketing the ground and lack of foliage.

What’s also interesting is that the turkeys tend to lower their guard to avoid danger in winter and become highly predictable.

Wild turkeys are very habitual in winter. They typically roost in the same woodlands, follow the same travel paths and use the same food sources around the same time each day. Variable weather conditions normally have little impact on their routine. Finding roost sites, fresh tracks, feathers or droppings offer great clues to these locations. Use trail cameras to pinpoint these spots at exact times of the day.

When it boils down to habitat, feeding and thermal roosting cover are the key components for turkeys in winter. Harvested, untilled crop fields adjacent to mature woodlands with a somewhat open understory are sought by turkeys as they provide good roosts and adequate protection from inclement weather and predators. Expanses of old-growth woods containing mast-producing species like oaks situated next to harvested cornfields or soybean fields that have not been disked and hold white-tailed deer are great places to start looking for signs of turkeys during the winter months in Nebraska. You should know that turkeys will even pick apart cow pies for corn or other grains in a cattle pasture.

Also, any wooded draws or fingers containing mast-producing plant species that extend into grasslands or croplands should not be overlooked.

Often, wild turkeys can be found in the same habitat as white-tailed deer.

For roost trees, along many streams and rivers, big cottonwoods are particularly important to the wild turkey. Large, mature hackberries are also commonly used. These trees offer sturdier, horizontal limbs and places for more than one bird to roost in the same tree. Ponderosa pines are significant roost trees in northern and western Nebraska.

Wild turkey hunters in this cold-weather season will discover that the birds generally segregate by gender and age. Hens and juvenile birds stick together while older males tend to hand out nearby in their own flock. Normally the birds are all bunched together when they’re at a common food source. Wild turkeys gather in wintering flocks that range from a couple hundred birds or more to less than a dozen.

Trust me, watching these winter flocks up close is remarkable and really gets the heart pounding!

Believe it or not, wild turkeys in late December and January can be really vocal. Those vocalizations can be intense when you are near the turkey roost. By and large, hunters will hear a fair amount of tree yelps, fly-down cackles, clucks, yelps and purrs. Once on the ground, however, usually few calls are made.

A good rule of thumb is to call occasionally or at times not at all during this final stretch of turkey hunting. Let the birds dictate what you are to do. If they’re talking, you talk. If they are not talking, you don’t talk. It’s that simple.

From firsthand experience, I will tell you that success can be had by using periodic, soft yelps and feeding purrs with slate calls that bring inquisitive hens or juvenile birds close. You might even call in an entire flock of turkeys by varying your calls with clucks, yelps, kee-kees or even gobbles.

The exception to calling sparingly in winter, according to wildlife biologists, appears to be a group of gobblers. They can be extremely vocal when they are flocked up and battling for dominance. Hunters encountering these flocks are encouraged to be aggressive with calls (gobbler yelps, gobbles, etc.).

Regarding decoys, load up the bag. Imitate a flock and put out your gobbler or jake decoys, too. Or, at a minimum, utilize a decoy that resembles a real hen. Set it out to represent a lost turkey looking for a flock, if need be. Hunting without decoys can work, as well.

Portable, camouflaged ground blinds are wonderful things to have for winter wild turkey hunting. These blinds offer mobility, concealment of movement, easy use of shooting sticks, protection from the elements and comfort with chairs and a propane heater. Plus, the blinds don’t seem to bother wild turkeys if they are “brushed” into the landscape. Try to set your blind up about a week or so before you plan to hunt from it, if possible. This will allow the birds a sufficient amount of time to get accustomed to the added feature on their turf. Finally, be vigilant about your approaches to and departures from the blind. I have been busted by flocks of turkeys more times than I can count either traveling to or leaving my blind. Use the terrain and cover for concealment. Move cautiously. Plan to arrive early and stay late.

Blind or no blind, successful wild turkey hunting in winter requires blending in to the environment, complete focus, little movement and a low noise factor.

Another important aspect of winter turkey hunting is practicing how to use the sun and shadows. Think about the old western cowboy movies, every gunfighter wanted to have the sun at his back. It’s the same way in turkey hunting. If the sun is at your back, it is far easier for you to see the turkeys and more difficult for the turkeys to see you. This positioning also makes it easier to view flocks and pick out individual birds with your binoculars.

When it comes to wild turkey hunting in the Husker State, there is no need to wait for blossoms and greenery! Check out our turkey hunting guide publication and get ready to go now! As a matter of fact, most hunters already own the gear they need to take to the woods. Keep in mind that all 93 Nebraska counties have populations of wild turkeys. There is still much time on the calendar to purchase a Nebraska fall wild turkey hunting permit (good for two birds) and habitat stamp on OutdoorNebraska.gov

You may even want to give this idea some thought: Skip the busy supermarkets for a frozen bird and shoot your own holiday period or New Year’s turkeys!

Additionally, don’t forget that youth turkey hunting permits are reduced in price and a bargain at $8! Pass on the tradition of hunting wild turkeys with someone in your household or “bubble” and enter our Take Em Hunting challenge.

For more information about wild turkey hunting seasons in Nebraska click this link.

The post How to Hunt Nebraska’s Wild Turkeys in Winter appeared first on Nebraskaland Magazine. 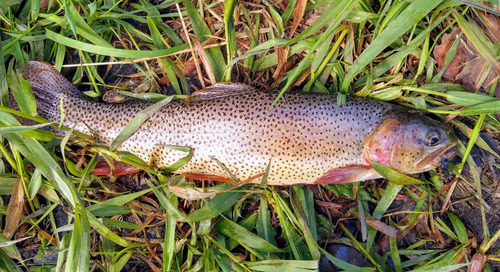 I know some of you have wondered if we were ever going to send out Trout Slam certificates and pins again? ... 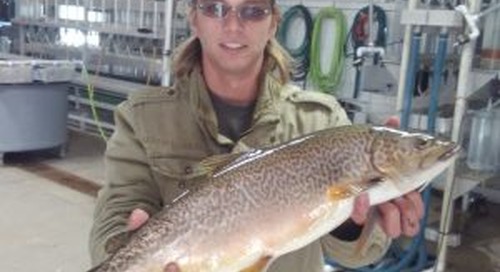 LINCOLN, Neb. – In a year of above-average angling pressure, the Nebraska Game and Parks Commission recentl...