How to Clean a Pike (and Recipe)

I stumbled across this recipe while surfing and fishing North Carolina’s Outer Banks. A woman selling freshly caught fish out of her home recommended the black-bellied rosefish her son had caught that morning. Having never heard of the fish before, I asked her how she would cook it. She rattled off a list of ingredients, but being in a remote area with no grocery store we told her we didn’t have much to work with. Without a thought she went into her kitchen and gathered everything in a sack and gave it to us. I have her to credit for the recipe. It has changed a bit since then, but the bulk of the recipe is hers. It will work with any flaky white fish, but it’s perfect to show off the boneless “backstrap” cut filleted from a pike (see below).

Preheat the oven to 400 degrees F. Toss the potato slices in a large bowl with 3 tablespoons of olive oil, arrange them on cooking sheet and sprinkle with salt. Bake the potatoes for 10-15 minutes until they are cooked through.

While you wait for the potatoes to cook, bring a large pot of salted water to boil and blanch the green beans for two minutes. Remove them to an ice bath to stop the cooking and set aside.
In a sauté pan, melt 2 tablespoons of butter over medium heat and cook the red onion until it softens. When it begins to look transparent, add the garlic, slivered almonds, and blanched green beans. Cover and turn the heat to low.

In a frying pan or skillet, place 1 tablespoon of butter with 1 tablespoon of olive oil over medium-high heat. When the butter has melted, place the pike fillets in the pan and let them cook until most of the fillet has turned white and the bottom has browned, approximately 8 minutes. Carefully flip the fillet and turn the heat to low.

By now the potatoes should have finished cooking. Place them on the top rack of the oven and turn the broiler on high. Watch them until they start to crisp.

Remove the fish to a plate and pour the remaining juice into the sauté pan with the green beans, adding the half and half and an additional three tablespoons of butter. The gelatin released from the fish will bind the sauce. Place the potatoes on a plate and top with green beans and a pike fillet. Season the sauce to taste and then pour it over the fish, making sure to include the almonds, red onion, and garlic.  ■

Cleaning a Pike to Remove Y-bones

1. Begin by making a downward cut behind the head until you feel your knife touch the spine, then turn the knife and follow the spine until you reach the dorsal fin.

2. Once you have removed the top fillet you can see the Y-bones in the center of each side fillet. In this photo, the tip of the knife points to the Y-bones. The Y-bones are the small intricate bones that cause many anglers to disregard pike as a good eating fish. As you can see, they are easy to identify and work around.

3. Starting near the head, run your knife along the outside of the Y-bones, working down along the belly and continue toward the tail until you reach where you removed the top fillet.

4. The Y-bones end as you approach the tail. With practice you will be able to feel where they end with your knife. When you reach this point, fillet the meat from the tail as you would on any other fish, removing the skin from each cut.

5. You will now have two boneless tail fillets, two boneless side fillets, and the prized top fillet. Notice the two cuts to the left of the image. These are the rib sections containing the rib and Y-bones. Simmered in liquid, you can flake the meat from the bones leaving no waste from the fish. This flaked fish is perfect for tacos, fish cakes, or any other way you can use flaky white fish.

The post How to Clean a Pike (and Recipe) appeared first on Nebraskaland Magazine. 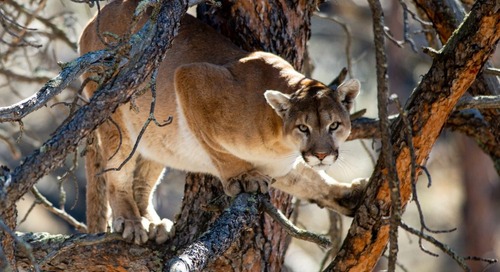 Thanks to research in the Pine Ridge, we are gaining knowledge about one of Nebraska’s most criticized, tre... 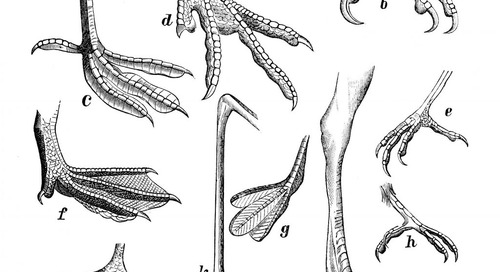 Just like the shape of its bill, a bird’s feet can tell us a lot about its ecology and the habitat in which...