Home » NEBRASKAland Magazine » How Do I Cook Wild Game?
× Share this Article

How Do I Cook Wild Game?

But with so many options for cooking wild game meat, it can be difficult to know where to start.

No matter what the scenario is, any professional chef will tell you there’s nothing magical or mystical about preparing a delicious wild game dinner. Anyone who can cook at all can serve a savory supper using wild game birds and animals that are often far superior to “domestic” offerings.

Before you embark on any recipe for wild game though, you need to know the basics. If you are new to cooking game meat or haven’t done it for a while, here are the fundamentals  to follow, according to longtime executive chef and Iowa Western Community College Culinary Instructor, Gene Cammarota of Omaha, NE.

–    Leaner, but drier. Game is leaner than domestic meat because wild animals walk, run, fly and roam freely all the time. Wild game meat is high in protein and low in fat, but higher specifically in Omega-3 fats. With cooking, due to the leanness of wild game, it runs drier than most domestic meats, so recipes that keep it moist are a must! Also, avoid treating game meat as a substitute for other more common proteins in recipes, instead choosing preparations designed to enhance it’s unique qualities.

–    Fast on high heat, long time on low heat. Your game meat will be succulent if you cook it for a short time on high heat or a long time on low heat. Game meat needs to be cooked thoroughly, but is best done medium-rare or until it pulls apart! The exception to the medium-rare recommendation is ground wild game burger patties. It is recommended that deer, elk, and pronghorn antelope patties be cooked closer to medium temperature.

–    Grilling versus smoking. The split between grilling and smoking for game meats is similar to traditional domesticated meats. Steaks and chops are best when cooked quickly on a hot grill. Cuts with a lot of connective muscle tissue (e.g. shoulders and ribs) that must be broken down are best suited for the “low and slow” heat of a smoker. If you  don’t have a smoker, consider adding some liquid smoke to your wild game meat. It offsets any “gaminess” to the taste. Incorporate liquid smoke in your marinade, or just sprinkle some of it on the meat and let it set a few minutes before cooking.

–    Younger game, older game. Younger game birds and animals generally taste better and are tenderer than older ones. Use young game in most recipes; reserve older game for stews and braising. Canning is also a good way to go with tougher cuts of meat.

—    Give it a rest. By allowing game meat to rest for several minutes immediately after cooking, you will give the juices a chance to redistribute. During the cooking process, the juices tend to concentrate in the coldest part of the meat, which is in the center.

–   Age, tenderize and add flavor. Aging game will help tenderize it and add flavor. Essentially, aging is a change in the activity of muscle enzymes. The deterioration and the breakdown of cell molecules creates intense flavor, which improves further upon cooking. As an example, you should age an old wild turkey gobbler for about a week before freezing it or cooking it.

–   Less is better. Simpler recipes are not only easier; they respect the nuances of game meat. Use sauces, spices, stocks and seasonings sparingly to enhance, not overpower your game. Sometimes we do too much to a wild game dish like smothering it in cream of mushroom soup!  Game meat should be served with flavors that accentuate its flavor but not ones that cover it up.

–    Fresh herbs. When a game recipe calls for herbs, purchase them as you need them from the grocery store or start a small herb garden. Old herbs have little taste. Preferred herbs to use with wild game are rosemary, sage, thyme, garlic, onion, bay leaves and juniper berries!

–   Wines and wild game. To keep things simple, use white and rose wines for upland game birds, red wines for everything else.

–    Let it soak! Let wild game meat soak in marinades or brines overnight, or at least for several hours. This will help add moisture and flavor to your meat as well as tenderize it. For brining in a saltwater solution, the proper ratio to use is 2 tablespoons of salt to 4 cups of water. Among the most common soaking liquids are buttermilk, saltwater, white milk, Italian salad dressing, vinegar, and lemon or lime juice.

–    Add some fat.  Another classic method for cooking game meat is to add some fat to the dish. One way to do this is to mix the wild game meat with a fattier meat (e.g. stew or brats made with half venison and half pork sausage); you could also go for the time-honored “wrap it in bacon” trick!

–      Rub it in. Sprinkle herbs and rub seasonings on your game meat with your fingers and then let it sit a while before cooking. A general rule of thumb is one tablespoon of spice mix per pound of game meat. Brush a light coat of olive oil on meat that has been dry rubbed to help seal in flavors and moisture.

Turning dead critters into delicious meals is not a daunting task. Don’t forget that good-tasting wild game actually begins in the field with immediate field dressing and cooling of the animal or bird.

The premier part of serving wild game is that it is in concert with the trends that modern-day foodies embrace – it’s natural, locally produced, free ranging and a renewable resource harvested in a sustainable manner (hunting).

With its rich, intense flavor and high nutritional value, wild game meat is a fun, fascinating way to expand your culinary horizons and offer something new and different at the dinner table. All nutritional considerations aside, it’s just flat out “cool” to cook something wild, something you’ve never eaten. Try it!

*Note: Be sure to check tagging requirements, custody regulations and transport laws for wild game.

The post How Do I Cook Wild Game? appeared first on NEBRASKALand Magazine. 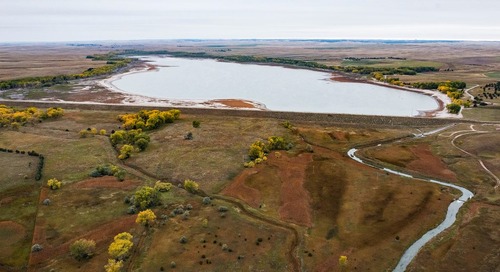 I have had several questions about the exceptionally low water at Box Butte Reservoir this fall.  If you ha...