LINCOLN, Neb. – Hunters from across the country have come to discover what Nebraskans know – the state has excellent wild turkey hunting. For the fifth year in a row, Gov. Pete Ricketts has proclaimed Nebraska the best turkey hunting destination in the United States.

Nebraska has a restored and abundant population of wild turkeys, including the highly sought-after Merriam’s turkeys in the Pine Ridge. With hunting opportunities in every county, there are tremendous opportunities for hunters.

In a postseason survey, hunters report high success and satisfaction rates, with 97% of resident and 94% of nonresident spring turkey hunters saying they would hunt turkeys in Nebraska again based on their experience in the 2019 spring season.

Permits are unlimited in quantity in Nebraska. Turkey hunters can purchases up to three permits for the spring season and two for the fall season. They even can be purchased, accessed and displayed on a mobile device. Also, Nebraska champions youth hunting with its $8 youth turkey permits.

Hunters find plenty of accessible sites in Nebraska, too, as more than 1.2 million acres of land are open to public hunting in the state. Hunters and landowners are stewards of Nebraska’s natural resources, and mentors and leaders in conservation. Hunting, including Nebraska turkey hunting, brings family and friends together in a way that encourages appreciation for our natural world.

Nebraska welcomes hunters from across the country who help create an $848 million annual economic impact in the state, fueling the economy of towns large and small, and supporting nearly 9,000 jobs.

“Nebraska is the best place in the nation for turkey hunting,” Ricketts said. “Our thriving wild turkey population can be found in every one of our 93 counties. With affordable permits, accessible lands, and long seasons, our state offers an abundance of opportunities for turkey hunters.”

Said Alicia Hardin, Wildlife Division administrator for the Nebraska Game and Parks Commission: “We have known for a long time that Nebraska offers great opportunities to turkey hunters. We hope the recent warm weather, paired with the chance to make memories with family and friends, is the perfect reason to get outdoors, turkey hunt and get your spring started off right.”

Purchase permits at OutdoorNebraska.org or at Game and Parks permitting offices across the state.

Victoria Springs gets spruced up in time for centennial celebration 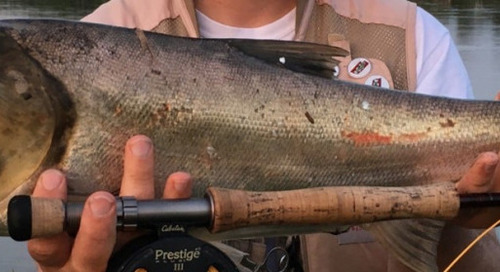 Biggest Silver Carp You Ever Saw!

By now you are probably familiar with the invasive nuisance species silver carp.  You know, the “flying fis...