The dog is crouched low, back straight, one foreleg slightly bent and eyes locked forward. The dog’s owner steadies him with quiet words. The handful of hunters, clad in blaze orange caps and vests and walking with shotguns in hand, see the dog go on point.

They slowly and carefully approach and then position themselves slightly behind and appropriately spaced on either side of the dog for the group of small, fist-sized game birds to erupt from the ground cover.

Each hunter is ready. The rapid heartbeats of the hunters can almost be sensed through their vests! The dog owner tells one of the hunters to step forward in front of the dog to flush the birds into the air.

Suddenly, the rush and roar of small, rapid wing-beats fills the air as the birds explode from the ground cover scattering in every direction. The blasts of shotguns echo through the wooded valley surrounded by cropland.

This is quail hunting in Nebraska.

It is like no other form of hunting. It is exhilarating, action-packed, and humbling to even the most practiced shotgun shooter!

I should know. I grew up quail hunting on our southeastern Nebraska farm.

The test of the quail hunter’s ability actually comes in a variety of ways. The hunter has to be constantly on the move. Pushing through bramble, crawling over downed trees, repeatedly crossing fences, and slogging through wooded creek bottoms are all part of the hunt. Bobwhite quail hunting demands strategy, fitness, stamina, good dog work, optimum shotgun shooting ability and knowledge of the bird and its habitat.

In Nebraska, the northern bobwhite quail (Colinus virginianus) is most common in the southeastern through south central regions of the state, but can also be found in southwest and portions of northeastern and central Nebraska.

It is found in the highest densities in the southeastern counties and along wooded river and creek drainages flowing through diversified farm country, especially the Republican, Platte and Elkhorn rivers.

Looking at the big picture, the Cornhusker State is situated on the northwestern edge of the bobwhite’s North American range.

I tell people that when it comes right down to it, the northern bobwhite quail is a native, non-migratory game bird species to Nebraska that thrives where shrubs and trees meet grassland, cropland and weedy areas. It’s that simple.

So what is the outlook for this year’s bobwhite quail hunting seasons in Nebraska? Great!

“This should be the best year for quail in quite a long time, says Jeff Lusk, our Game and Parks Upland Game Program Manager. “It’s been about 20 years since quail populations have been this high.” It would be a fantastic year to discover or rediscover hunting the northern bobwhite quail in Nebraska,” he adds.

I can certainly vouch for Jeff’s outlook and share his enthusiasm, especially when it comes to our southeastern Nebraska farm!

The bobwhite is among the most popular game birds in the state, second only to the ring-necked pheasant. Many Nebraska hunters think of quail as sort of a “bonus” game bird encountered while hunting rooster pheasants.  Dedicated quail hunters, though, use specialized equipment and techniques to maximize the opportunity to flush coveys and work single birds.

Besides the proper shotgun and shells, good shotgun shooting skills, and a possibly an effective bird dog, an understanding of the quail’s daily routine, behavior and habitat requirements greatly increase the chances for hunter success.

In fall and winter, bobwhites settle into a daily routine. At night, bunches or coveys roost in grassy areas near woody cover. Around sunrise and just before leaving the roost, one or two adult male quail give a covey call or whistle, vocalized as “koi-lee,” letting other coveys of quail in the area know of their location in order to space themselves across the landscape reducing competition for food and cover. Shortly after that, the covey leaves its night roost to feed.

Generally, quail feed mostly in corn, soybean and grain sorghum fields near grasslands where they have roosted. As winter arrives and waste grain gets harder to find, they rely more on seeds from plants such as ragweed, sunflower, dogwood and Osage orange. If food is abundant, the birds can satisfy their appetites quickly and move back into cover in a short time. At midday, quail move to loafing areas with decent overhead or canopy cover, usually grassy or weedy areas adjacent to brushy or woody cover with thick undergrowth and as close as possible to the fields where they feed. They remain in those loafing areas until late afternoon or early evening, when they venture out to feed before returning to their night roosts.

Those of us who are seasoned quail hunters are never in a rush to begin hunting when the legal shooting hour starts in the morning. We sleep in, go have breakfast, swap stories, talk about hunting strategy and then take to the field about two hours or more after sunrise. This offers quail coveys a chance to leave the roost, feed and return to good cover actually making it easier for the dogs to find fresh scent. The other productive time to pursue bobwhites is about two hours prior to sunset.

You go hunting when you have the time available and when you can safely go according to the weather forecast, right? Correct. However, there is no question that hunting northern bobwhite quail is at its absolute best on a cool day after some wet weather, or just after a light snow or hoarfrost when moisture improves the scenting conditions for dogs. Also, quail burst into the air from the ground more readily in windy weather than on calmer days, and when possible, quail hunters should always face and walk into the wind to reduce noise distractions, and improve the dog’s chances of scenting birds.  This tactic also helps a dog to hear running quail.

Bobwhite quail can usually be found in or near their feeding areas during the hunting season. Grassy waterways, old abandoned farmsteads, hedgerows, shelter belts, wooded draws and creek banks near corn, soybean or grain sorghum fields are good places to try to locate them. In southeast Nebraska counties, I have always preferred to look for quail in loafing habitat like grassland acres that abut harvested cornfields but separated by a weedy fence line with a timbered, thicket-like creek bottom nearby.

Quail often use those weedy or brushy fence lines as travel lanes and midday loafing sites, and like pheasants, initially attempt to out-run hunters and dogs before flushing on the side of a plum thicket or hedgerow opposite the hunter. So, positioning a hunter on each side of that bramble-filled fence row ensures that at least one hunter will have a clear shot when the birds flush. it is important to note that when a covey flushes within range, pick out a single bird, and don’t rush the shot. Be vigilant for birds still on the ground even after a flush!

One thing that is interesting is that bobwhites are creatures of habit. Quail coveys normally are in the same places year after year, and typically fly the same escape routes when they flush, no kidding!

I think in some respects quail are easier to hunt early in the season when cover is abundant  and immature birds are less wary than the adult birds and are more apt to hold for a dog. Later, after periods of frigid weather and snow, quail seek heavier, woody cover.

Other Key Tips for Quail Hunting

Stay as quiet as you can be. Quail rely on their hearing to detect danger. They will travel hundreds of yards away to escape, resulting in you having a more complicated hunt.

Look for fresh tracks. Always look for fresh signs of quail tracks to tell if they are in the area. Old tracks or no tracks probably mean there are no quail around.

A lightweight, fast swinging shotgun with an open choke works well for hunting the bobwhites. Most of us avid quail hunters use #7½ or #8 bird shot.

Never shoot a low flying quail. Shooting at a low flying quail could cause you to lower your muzzle below a horizontal plane with the ground. Doing this could end up taking the life of one of your dogs! Besides, after the covey’s initial “lift off,” their flight will level out, and this is when you should aim and shoot.

From watching a good bird dog work a variety of habitat to the heart-stopping thrill of a a dozen or more quail exploding into flight from the ground, few experiences in the hunting lifestyle match quail hunting and this is the year to “go bonkers for bobwhites!” 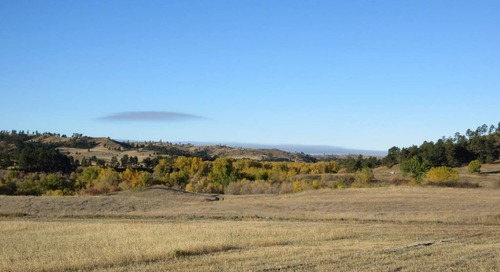 I had some meetings to attend “out west” a couple of weeks ago.  That gave me a chance to re-visit some pla...

Motorists should use caution to avoid collisions with deer

LINCOLN – Deer are more active this time of the fall. Crops are being harvested and deer breeding season is...