Give CPR to Big Catfish

Did you see that? She released that big catfish back in the water! But, why? She should have taken that big fish home, cleaned it and ate it!

Why do some people get perplexed when they see someone release a massive, master angler-sized catfish? After all, catfish, especially larger ones, sure taste good, don’t they?

So why is it every time we see an angler report or post a mention or picture of a large catfish they have put back in the water, a spirited discussion, no scratch that, a huge dispute ensues over what is ethical?

So how do we move beyond flaming the angler who chooses to release a sizeable channel, blue or flathead catfish?

Allow me to inform you on why I am so passionate about and concerned with that whopper being taken home for the fryer.

First, let me say that I have never judged any licensed angler who has kept a large catfish to eat, and I won’t as long as that licensed angler is obeying the laws and regulations set forth by the Nebraska Game and Parks Commission.

But, let’s go deeper into the issue of catching and releasing voluminous catfish family members.

Unlike other game fish, the growth of catfish is very slow. Actually, catfish are among the slowest growing freshwater fish in our part of the country.

Texas Parks and Wildlife Department age and growth studies indicate that a 40-pound blue catfish could be 25 years old! A 30 inch blue catfish in Oklahoma and Missouri averages 10 to 12 pounds and is most likely around 14 years old! And, in Nebraska, Daryl Bauer of the Game and Parks Commission’s Fisheries Division adds that a 10 pound channel catfish is most likely dozens of years old!

So, it takes a while for catfish to reach trophy and spawning sizes with some not even surviving adulthood under ideal or normal conditions. Also, with catfish, larger specimens pass on physical traits and survival instincts to thousands of young. Essentially, proper catch and release fishing improves wild catfish populations by allowing more fish to remain and successfully reproduce in an aquatic ecosystem in greater numbers. Keep in mind that mature catfish can lay anywhere from 4,000 to 100,000 eggs in cavities, and breeding males can fertilize as many as nine spawns a season if the eggs are removed from the spawn site each time.

Furthermore, In-FishermanvMagazine’s Doug Stange, says statistical evidence suggests that once catfish attain a larger size they may continue grow exponentially by weight. One key, he says, to catching bigger catfish in any water body, is to limit the harvest of large fish, in favor of releasing them to be caught again and again. The practice of catch and release fishing provides an opportunity for increasing numbers of anglers to enjoy fishing and to successfully catch a memorable catfish.

Catch and release fishing works but only if you learn to properly handle and care for big catfish.

Here are their eight things to remember when putting a lofty catfish back in the water to ensure the best chances for its survival:

“Game fish are too valuable to be caught only once” – Lee Wulff, Widely Acclaimed Fly Fisherman.

The post Give CPR to Big Catfish appeared first on NEBRASKALand Magazine. 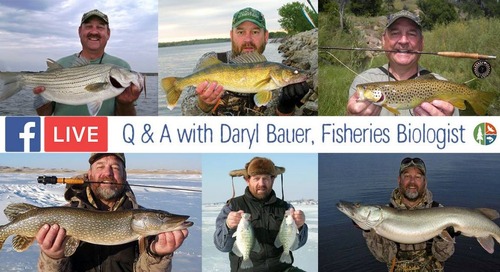 I do not think I am that old, but I suppose I am old enough that this old dog has new tricks, new technolog...

LINCOLN, Neb. – A Becoming an Outdoors-Family Dutch oven cooking workshop is scheduled for June 29 at Louis...