Got an interesting photo from one of our “fish squeezers” on the water already this spring. . . .

We do not have a large request for pike stocking in Nebraska waters this year, but we do have some.  So, that means crews venture forth as soon as the ice is out to set nets to capture spawning pike.  Only problem is, sometimes after those nets get set, it re-freezes.  That means someone has a lot of ice to chop!

If you are interested in that work, I blogged about the pike egg collections a couple of years ago, let me copy and paste some of that here:

In the past week or so, we have had field biologists and hatchery personnel from our Valentine State Fish Hatchery collecting northern pike for eggs and milt to produce pike for stocking Nebraska waters this year.  Those collections occurred on the Valentine National Wildlife Refuge and the pike spawn was in full swing this past week.  Our crew in a short time collected all the pike eggs we needed to meet our stocking requests this year.

Frame nets are very effective for capturing pike in the spring: Pike spawn right after the ice is gone; in fact in a late spring they will begin spawning under the ice.  That means pike egg collections are usually done when it is cold.

Once the pike are collected, they are hauled in large hauling tanks back to the hatchery where eggs and milt can be collected in a little more comfort.  Accuse us of being lazy state workers, but we have discovered that collecting the eggs and milt in a sheltered facility results in higher fertilization rates and better production of baby northern pike.  After extracting eggs and milt, the adult pike are hauled back to the water body from which they were captured. Let me comment on one thing in that photo:  You see the probe being held in the pan and the meter that probe is attached to.  I am betting that was a pH monitor, and yes, changes in pH also can make a big difference in fertilization rates.

The semen came from a bottle: If you are still reading, I hope that last statement got your attention:  “Wait a minute, the male contribution to fertilization comes from a bottle???!!!!!”  Yep, that is what I said, the semen came from a bottle.  Milt was carefully collected from male pike and then placed in an “extender” solution that keeps the sperm alive and well.  Again fisheries biologists have discovered that we can get better fertilization by using “extended” semen.  That is probably because dilution of the milt gives us better distribution of semen to fertilize all the eggs in a pan.  After the milt is added, it is all carefully mixed together using the third primary feather from the right wing of a mature, male, Merriam’s turkey (another important detail for maximum fertilization, oh yes, the eggs have to be stirred in a clockwise direction). I have to add that all of that is done in a pan that is as free of water as possible.  Again, I hope that gets your attention as we are spawning fish and trying to keep everything as dry as possible!?  The sperm is not activated until water is added.  By keeping everything as dry as possible, we can get the best distribution of sperm in a pan of eggs and then when water is added, we can achieve the highest fertilization rate possible.  It may not be rocket science, but it is science, fisheries science!

Eventually, the eggs are jarred up and placed on batteries where water is circulated through the jars until the eggs hatch.  Once hatched, most of the northern pike in Nebraska state fish hatcheries are trained to eat artificial food and then are grown to as large as 10-12 inches before they are stocked.

The post Freeze Up, Again appeared first on NEBRASKALand Magazine. 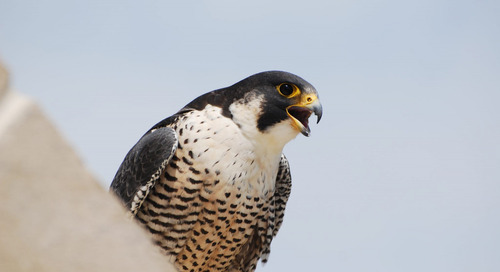 So here we are once again at the beginning of what should be another nesting season for our Peregrine Falco... 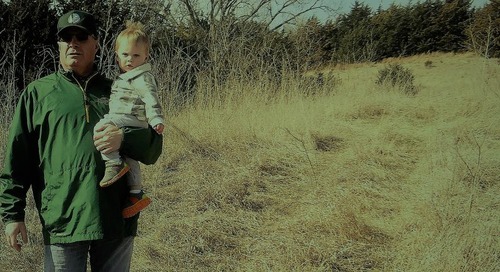 Take Your Tyke on a Hike