LINCOLN, Neb. – Game fish that remained after the Harlan County Reservoir stilling basin was drained were salvaged by the Nebraska Game and Parks Commission and returned to the lake for anglers to catch.

In preparation for an inspection of the dam, the U.S. Army Corps of Engineers drained the basin ahead of the Commission’s salvage effort Oct. 9-10.

“It was successful,” said Brad Newcomb, the Commission’s southwest fisheries supervisor. “We put nearly 1,300 game fish back into the lake. There was a reasonably good chance those fish would have died if we hadn’t done it.”

Channel catfish comprised 743 of the 1,262 game fish salvaged. There also were 145 wipers, 103 largemouth bass, 73 walleye, 63 flathead catfish, 63 bluegill, 62 crappie, and 10 white bass salvaged. Newcomb said many wipers were in the 15-pound range and some flatheads were around 40 pounds.

Nearly 16,000 pounds of rough fish, including common carp, buffalo, gizzard shad, gar and carpsuckers, also were removed from the basin.

Cranes lowered boats into the basin, where the water depth ranged from 4 to 8 feet over the two days. Electrofishing equipment was used to temporarily stun fish. Shocked fish rose to the surface, where they were netted and transferred to tubs on the boats. Crane buckets then transferred the game fish to hatchery trucks, which were used to release them back into the lake at Hunter Cove.

The Commission last salvaged game fish at Harlan when the Corps inspected the dam in 2000.

A stilling basin is a structure below a dam that slows the water released from the dam before it enters a river. 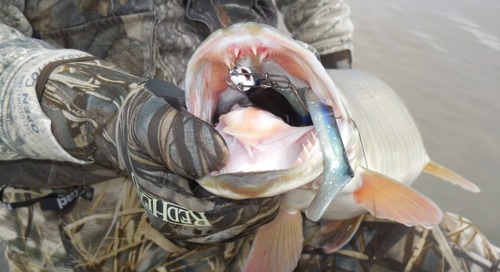 Why You Won’t Throw a Big Bait

I have been blogging for a number of years now.  Many topics come around seasonally year after year, and I ...