As a fisheries biologist I have had a bit of learning about science, enough to know that I will never know very much.  Given some time I can reference reams of information on a variety of topics, some more than others, depending on how much interest a particular subject has received from pointy-headed fisheries biologists.  The subject of aquatic habitat rehabilitation is relatively new, and to brag a little bit, Nebraska has been on the cutting edge with our Aquatic Habitat Program.  However, I believe there are a lot of misconceptions about what constitutes aquatic habitat.

One of our main goals when rehabilitating aging reservoirs is to improve water quality and reduce siltation and shoreline erosion.  A successful project is one where the water is clearer, cleaner, and there is a bunch of aquatic vegetation growing.  If you have read my blog for any time, you know I love aquatic vegetation–that is some of the best aquatic habitat you can have.

There is not a lot of scientific literature on aquatic habitat rehabilitation, there is some, but as I said it is a relatively new field.  So, no, I am not going to cite a bunch of peer-reviewed papers to prove my point.  Instead, one of my co-workers recently pointed out a blog post from an underwater diver who had some very interesting observations about artificial cover.  Nope, not scientific, but very interesting, and I learned a long time ago to listen up to folks who spend a lot of time on the water, or in this case, under the water.

You may be familiar with Engbretson Underwater Photography.  If you are not, it is about time you took a few minutes, visited the website and looked at the galleries.  The work there is fantastic!

There is also a blog there and yes, I am going to recommend you read a post there that is four years old.  I just recently saw it, Why Fish Cribs Work, and Why They Fail.  Take a few minutes, read that blog post, the underwater observations would be of interest to every angler!  If you are a pit or pond owner and are interested in adding artificial cover, you absolutely need to read the blog post.  I know it says “cribs” in the title and that is a very specific artificial cover that is more commonly used in natural lakes in places like Wisconsin, but what is said about fish “cribs” applies to every type of artificial cover.

Let me quote one paragraph that I found particularly interesting:

Let’s get one thing straight. Fish cribs are definitely not fish habitat.  They’re artificial constructions designed to concentrate unusually large numbers of fish in a very small area so fishermen can catch them.  Fish cribs do not normally provide the elements fish need for spawning or nesting.  At their best, fish cribs merely impersonate fish habitat.  In fact, in lakes with an abundance of excellent fish habitat, even the best- made and best-placed cribs will go ignored by fish in favor of superior natural structure.  In sum, fish cribs work best in lakes where there is little or no natural structure for fish to use.

Artificial cover, fish attractors, are good, no one is saying they are not, and some are better than others (read the blog!).  But, those artificial cover objects are not a replacement for aquatic habitat; real habitat enhancement includes a lot more than throwing in a few brush piles. 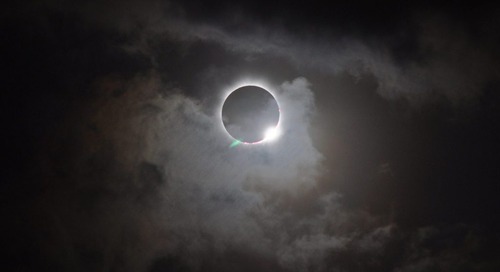 Are you REALLY ready for the total solar eclipse?

It will undoubtedly be among the most stunning sights you have ever witnessed. It has been labeled as one o...