When I am in the office, which has not been much lately, at the bottom of the stairs is a mount of two Tom turkeys fighting.  I love that mount, love that I walk by it at least a couple times every day.  It reminds me of a story. . . .

My sister married a guy from Pennsylvania.  Rick loves to hunt, still does, but at the time had been unsuccessful hunting turkeys in the spring.  Of course our family told him to come on out to good ole Nebraska and we would take care of that deficiency.   Plans were made one spring.  We would meet them in the north-central part of the state where we had hunted for years, where turkeys were plentiful.  My folks met my sister and bro-in-law at the airport and drove them up.  My family got a little head start.

I had exactly one evening to hunt before Rick got into town.  That was all I needed to jelly-head a big Tom.  That was perfect because then I could concentrate on helping my bro-in-law. We started at O-dark’ thirty the next morning.  I knew where a Tom had roosted.  Now, first thing in the morning is the best time to hear turkeys gobble, but they seldom fly down and come running to your calling the way you dreamed all the night before.

We actually got close to killing that bird right off the roost.  He flew down and made a pass by us, just out of range.  Then he linked up with a bunch of hens.  We spent the rest of the morning trying to get ahead of them; wherever those hens were going, that big Tom was going to follow.

We played the leap-frog game all morning.  The good news was we stayed in contact with that flock.  The bad news was we were never able to get in the right position to get a shot.

Late in the morning, we jumped ahead to a point on the canyon rim, and waited for them to show up.  After some time, we wondered where we had lost them and started scouting back the way we had come.  We found them in a grassy meadow up on top, five or six hens feeding, the big Tom strutting, and three or four Jakes hanging around.

As we watched, we heard another turkey gobble, farther away, on past the flock to the west.  As we wondered where that gobble had come from, another big Tom comes strutting up out of the canyon.

Those two Toms spotted each other and it was “on like Donkey Kong”.  Both birds rushed each other, and then wings were flogging and spurs were slashing.  The feathers flew.

It has always amazed me that turkeys can make so much racket, but can be quiet as a church mouse.  If you have ever seen a couple of Toms fighting, well, it is anything but quiet.  The hens just kept feeding, like nothing was going on.  The Jakes circled the fight like a bunch of boys on the schoolyard.  The combatants make a bunch of racket as well as the spectating Jakes.  They all made an aggressive rattling, purring sound mixed in with some gobbles and of course the wing beats.  Insults were thrown at each other as the Toms fought.

Mouths wide open, my brother-in-law and I watched this spectacle through our binoculars.  Then it dawned on me, while the fight was going on, we could get closer, a lot closer.  We slipped below the rim of the canyon and started covering ground.  The whole time we knew exactly where the birds were from all the noise they were making.  Soon we were directly below the birds, behind a big Ponderosa pine.  I whispered to Rick to sneak behind the pine tree to the top, peak around and see if he could get a shot.

Now, I have to tell you my last words to him.  I knew those two Toms would still be engaged and I knew Rick only had one permit.  My famous last words were “Make sure you only shoot one.”

Rick snuck up into position with me right behind him.  As we peaked over the top, the fight was happening only a dozen yards in front of us.

The hens had continued feeding away and were paying no attention to the fight nor to us.  The Jakes saw us, but they were still preoccupied with the fight.  Rick raised his gun but could not shoot.  The two big Toms were engaged in a pushing match, necks entwined, back and forth they went.  One shot would easily take both birds, but that was exactly the problem, my bro-in-law could only take one.

So we stood there and watched.  Like the Jakes, we were now spectators surrounding this schoolyard brawl.

We were standing straight up, not hidden at all.  Eventually, the Jakes drifted away from us, but those two Toms acted like they could not see us, or just did not care.

Back and forth they pushed each other, snood to snood, breast to breast.

How could we get them to separate so Rick could shoot?  I reached in my vest pocket and pulled out my hawk screamer.  A hawk screamer is always in my vest while turkey hunting because you can get a Tom to shock-gobble at the shrill scream.

I blew the hawk screamer for all it was worth, those Toms paid no attention.

Necks entwined, the two Toms started to drift away from us.  As they did, I said to Rick, “make sure to keep them in range!”

The resulting scene was something from a war movie, my brother-in-law with his shotgun at the shoulder, marching two prisoner Toms at gun-point across a grassy meadow.

I trailed just behind.

Then, finally, they separated!  Of course, as soon as they did, they stood heads erect, one in front of the other.  Rick still had no shot.

For a moment, like in the street of an old western town, we all stared at each other, afraid to blink.  Who would make the first move?

Then the birds separated, took a few steps apart.  Finally!  A shot!

Rick’s shotgun barked, I could not even tell you which bird he shot at. . . .

Two big Toms turned and started running for the edge of the canyon.  And then wings that had been used as weapons were carrying them into they air.

There they were, gone!

Rick turned, a look of disbelief on his face, shoulders slumped.  I fell to the grass, rolled onto my back.  How could it be?

I took my knife out of its sheath, turned the handle and offered it to my bro-in-law.  “Here, stab me, just kill me now.”

We sat there in the grass, shaking our heads, mumbling incoherently for minutes, maybe it was hours.  Neither of us could believe what had just happened.

Then we decided it was time to take a break, have some lunch, calm some nerves.  We trudged back to the cabin.

We hunted hard for a couple, three more days.  Oh yes, my brother-in-law finally killed his first turkey.  My cousin and I teamed up and helped him get that done a few days later.  He has killed a lot more since. We have never forgotten that hunt.  Never will.  Rick and his hunting partners have never bought just one spring turkey permit any season since.

I have been privileged to witness other gobbler fights since then.  Took advantage of another one to bag a last minute, big gobbler in what had been a particularly challenging spring.

But, I remember that morning every time I use those stairs going to or from my office. 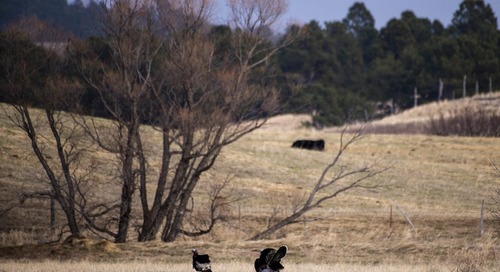 This time of year, with Nebraska’s popular firearm turkey season getting underway, the Panhandle and its pu...