OK, you have to understand that biologists tend to think about things a little bit differently, maybe even a little bit warped.  Subjects and discussions that may be uncomfortable or turn the stomachs of some can be lunch break conversations for biologists.  For example, we tend to be fascinated by the mating habits of this species or that species–it is how the species is perpetuated, how life continues.  I have something interesting about fish mating habits to share in this blog post and yes, I tried to put a racy title on it to catch people’s attention.  You may think I am pushing my blog’s “PG” rating, but as a fisheries biologist I see it as life, just the study of life.

If you have not spooked and are still reading (maybe because you are intrigued?), let me tell a little story. . . .

I was out helping sample Flathead Catfish earlier this summer.  Catfish are the latest spawning fish in Nebraska waters, it is mid-summer, July, before our Catfish species perform their annual spawning rituals (EDITOR’S NOTE:  Almost all of our Nebraska fish are “spring”, or in this case, summer spawners.  However, we actually have two species of Trout that are fall spawners, Brown and Brook Trout.  So, I guess you could say they are our latest-spawning fish, but I put fall-spawners in a class by themselves).  When we were doing that sampling it was about the time the Flathead Catfish would be spawning–the males would be guarding spawning territories and trying to “convince” females onto their “beds” to spawn.  I expected we would see evidence of that as we collected fish; boy, did we ever. . . .

The spawn is another one of those periods in nature that is hard on critters.  During spawning season fish tend to put a lot of energy into spawning behavior while spending less time taking in energy or feeding.  For a fish, the spawn period is stressful.  If you are a Catfish, especially a Flathead Catfish, “stressful” ain’t the half of it.  Flatheads are downright nasty to each other especially during the spawn.  Male Flatheads will battle each other for spawning territories and violently guard their beds.  They are not very nice to the ladies either as male Flatties will try to forcefully move females onto their beds to spawn.  How do they do that?  Well, they have no hands, no legs, no arms, about the only thing they can do is bite.  During the spawn period and just after, it is not unusual to see evidence of this activity, to see fish with some very nasty wounds. Take a closer look at the adipose fin; looks like something grabbed on and would not let go. Sorry, I realize those pictures are ugly.

I do not know the sex of that fish.  On some species of fish you can make an educated guess of sex just by the size of the fish, but with Flathead Catfish neither sex tends to be larger than than the other.  As I recall, that Flathead was well over 40 inches and that fish weighed dozens of pounds.  I am guessing those wounds were caused by another Flathead of comparable size and I can only imagine the battle royale that raged beneath the surface.  Whether it was two males “duking it out” or a male grabbing a female across the back and trying to coerce her into spawning, either way it was not a quaint little tea party.  It was a no-holds-barred brawl.

As you know Catfish do not have scales of any kind.  Fortunately, their skin has a protective mucus coat (Yes, Fish are Slimy!), and possesses extraordinary healing properties.  I have no doubt that particular fish has healed by now, may have some battle scars, but came through perfectly healthy.

One thing that I am always wondering is what is going on below the surface of the waters I fish?  I believe there are countless predator/prey, and at certain times of the year, spawning dramas that play out continually, most of which we have no clue about.  But, every now and then we get little hints, little glimpses, and some of it is amazing. . . . even if it is a little disturbing. LINCOLN – Bring the family to Ponca State Park on Aug. 20 for a day full of fun and educational activities.... 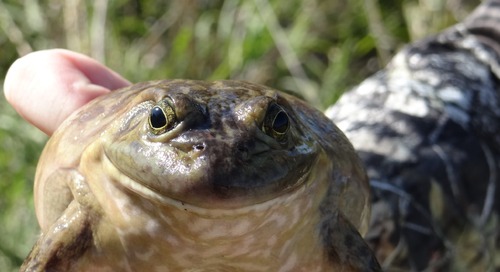 It’s truly an adventure. It’s quite unusual. It’s a challenge. It’s entertainment value is high. And, it wi...