Fall can be productive time for fishing

LINCOLN, Neb. – Some of the best fishing of the year can occur in the fall, when fish actively feed to prepare for the coming winter.

Many of those feeding fish are beginning to develop eggs and milt for next spring’s spawn. The fall bite can be so good because those fish need the additional energy to spawn.

Fall is one of the best times of year to catch some of the biggest, fattest fish. An abundance of natural prey in Nebraska waters means our fish still have plenty to eat in the fall, and those well-fed fish can be a challenge to catch. The abundance of prey in autumn is still less than in the summer, so fish have to hunt for prey more than they did during the summer.

“Most of the year, finding enough prey to eat and grow is the primary driver of fish behavior, and that is most true in the autumn,” said Daryl Bauer, fisheries outreach program manager for the Nebraska Game and Parks Commission. “Knowing what the fish are eating and finding concentrations of that prey will be the key to finding fish in the fall.

“The prey for larger Nebraska predator fish could range from young-of-the-year panfish moving out of dying fall aquatic vegetation, to frog migrations, to open-water baitfish moving into the shallows on warm fall afternoons and then migrating toward deeper water later in fall,” Bauer said. “Locating fish in the fall really can be as easy, and as challenging, as locating their prey.”

Generally, fish still can be found shallow in the early fall, especially during stable, warm weather. Later, baitfish and larger sport fish start moving to deeper water. Even then, warm afternoons may see some fish moving back into shallower water. Structures with areas where shallow water is close to deep water tend to hold a many fish. Fast-breaking points, creek channel bends, humps, or any areas where shallow water is near deep water tend to be spots where fish are likely to be found in the fall.

“One important thing to keep in mind is that all the natural baitfish have been growing during the summer,” Bauer said. “Big baits equal big fish, and that is especially true in the fall. Fish can gain more energy by consuming large prey items in the fall, so super-size your baits in the fall.”

Visit OutdoorNebraska.gov/fishing for more information on fishing in Nebraska.

The post Fall can be productive time for fishing appeared first on NEBRASKALand Magazine. 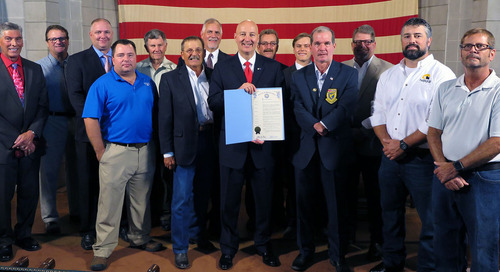