Elwood ice fishermen should use caution during pumping

LINCOLN — The Central Nebraska Public Power and Irrigation District has resumed pumping operations into Elwood Reservoir as part of efforts to utilize excess flows in the Platte River for groundwater recharge in and adjacent to Central’s irrigation service area.

Central reminds people who use the lake for winter recreation that ice conditions can be affected by rising water levels as more water is pumped into the lake. Extreme caution should be used, particularly by ice fishermen venturing onto the ice.

The Nebraska Game and Parks Commission recommends that an angler should not venture onto a frozen lake or pond unless at least 4 inches of clear, solid ice is present.

Game and Parks also suggests ice anglers wear a life jacket while on the ice, carry ice picks, use a spud bar to check ice thickness, and keep a long rope with them to aid in rescue if they fall through the ice.

Central has agreements with Tri-Basin Natural Resources District, the State of Nebraska and the Platte River Recovery Implementation Program to divert excess flows into its canal system during the non-irrigation season for recharge to benefit groundwater levels and return flows to the river. Diversions for recharge are subject to weather conditions and can start or stop at any time throughout the winter.

Recharge operations were delayed this fall by a bridge and culvert construction project near the head gate of the E65 Canal, which prevented diversion of water into the canal.

Also, Johnson Lake’s water level — which was lowered to facilitate the collection of shoreline survey data — will begin rising over the next several days to normal winter operating levels. The water level was lowered about 3 feet over the past couple weeks to allow access for the surveying project. After the project is completed, the lake will rise about 2 feet to its normal winter levels.

The post Elwood ice fishermen should use caution during pumping appeared first on NEBRASKALand Magazine.

LINCOLN — The Nebraska Tourism Commission and Nebraska Game and Parks Commission invite teams of runners an... 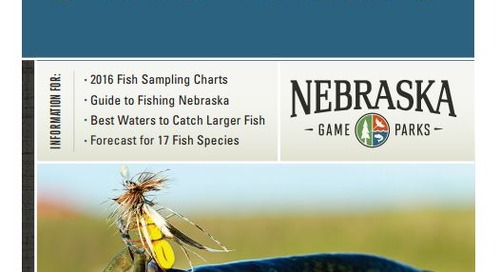 I had a blog ready for today, but it can wait, because I know a whole bunch of Nebraska anglers will be wai...