In what can only be described as an Easter Sunday shocker, the Peregrine Falcons at the Capitol welcomed their first egg on Sunday, 16 April. This egg is a surprise (at least to me) because it comes so late in the spring.  It appears almost a month (27 days) later than when the first egg at the Woodmen building in Omaha appeared.  The Capitol’s first egg usually appears about a week later than the Woodmen pair’s first egg.  It is also the latest a first egg has appeared at the Capitol since the birds started nesting here in 2005.  While this event is exciting, I am tempering my expectations on whether there will be any more or whether this one egg will hatch.  This pair appears to have had problems producing this one egg and their overall fertility has been on the decline in recent years.  However, Alley and 19/K continue to overcome the odds and they have a terrific record of proving me wrong – hopefully they will do it again

See what transpires in the nest box by checking out our Falconcam. 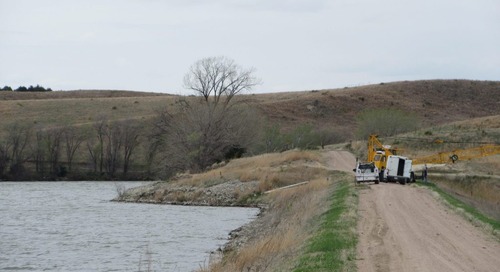 If you frequent Jeffrey Reservoir south of Brady, you are aware of the dredging work that was done there la...

Sight-in range being built at Killdeer WMA in Lancaster County