A couple of weeks ago I wrote a blog with some ideas about catching fish right through the heat of the summer.  I said there that I may not do as much fishing in the heat and humidity, but I fish all the time, 12 months each year.  I got to thinking on some recent trips about some of those Dog Days fishing tips and darned if they don’t work!

It is the peak abundance of natural prey that makes the bite tougher during the summer.  The fish still gotta eat, in fact more so during the summer than when the water is cooler, but with so much natural prey, feeding periods can be intense, but short.  So, timing is everything.  I know a very good angler who once said he would rather spend the right hour fishing a good spot than spending ten hours waiting for the fish to turn on.  I will always tell you that the best time to fish is whenever you have time, but it is so true, especially during the summer, that being in the right place AT THE RIGHT TIME is critical.

When is the right time?  Any low-light conditions are times when fish are more likely to become active and looking for prey.  Yes, every angler knows that mornings and evenings can be key times, but there are other conditions when the bite can turn on.  For example, just before a summer thunderstorm blows in, the fish can go nuts.  I was deep in the Nebraska sandhills a couple of times in the past couple weeks.  On one of those occasions, I put my float tube on the water in mid-afternoon hoping to fish until dark, but knowing that severe thunderstorms were forecast that evening (ALWAYS be aware of weather conditions and forecasts if you are going to be spending any time on the water!).  After some hard fin-kicking to work through the thick aquatic vegetation, I finally started running a buzzbait over the vegetation and through any openings and pockets I could find.  There is nothing funner than catching fish on top-water baits.  It took me a bit, but eventually there was the big explosion on my bait that I was hoping for!

It was not much longer and another Largemouth blew up on my buzzbait.  I put the steel to her and she went berserk running for open water and then cartwheeling 3 feet out of the water!  Then she dove down into a bed of Coontail, but I was not worried–I would just pull up the clump of aquatic vegetation and sort my fish out of it.  I did, but there was no fish in the middle of it all.  Arrrgggghhhhhhhhh!  No matter, just get another one. . . .

Then I heard the first rumble of thunder and soon spotted some lightning just to the west.  It was time to get off the water. I knew if I had more time to fish, I probably could have caught a bunch more Bass and maybe a big fish or two, but I do not fool with lightning.  Yes, the thunderstorm cut my fishing short, but it also may have been why I was able to hook into a couple of really nice Bass in only an hour or so of fishing.  Oh well, that’s life on the Great Plains!  The storm was a doozy when it finally caught up with me.

A few days later I was back in sandhills country to celebrate the 4th of July with my family.  That meant we had a lot of family activities, but you know I slipped away to do some fishing when I could.  I could not wait to get back on the same water and catch more of those beautiful sandhills Largemouth Bass.  My son Daniel joined me for the next adventure and this time we got a rare cloudy, drizzly, mid-summer day–again low light conditions that could produce some active fish in a positive feeding mood even during the middle of the day.

We started with the top-water baits again, and some weightless plastics; picked up some fish, but were not quite “dialed-in”.  I started burning a spinnerbait, a presentation not much different than the buzzbaits, but that definitely did the trick.  Perhaps with the breeze and cloudy conditions the fish could not pinpoint a top-water bait?

Anywho, it was not long and we lost track of the number of Bass we caught, well into double figures.  The smallest fish were 15-inchers.  Of course Daniel caught a couple of the biggest, fish over 20 inches. With clear water and an abundance and variety of aquatic vegetation, Nebraska’s sandhill lakes are excellent Largemouth Bass habitats.  I believe the Bass from those waters are some of the fattest, and prettiest Bass you can find anywhere.  I will admit to you that we do not spend a lot of time each year intentionally targeting Largemouth Bass, but we spend some, and I love it when we can do that on a sandhill lake.

Was the aquatic vegetation on that sandhill lake at its summer peak?  Yep.  Was it a chore to get around and fish?  Yep.  But, the fish were there and they were catchable.  Sometimes ya just gotta go in after them. Another strategy I mentioned for consistently catching fish through the heat of summer was to be versatile and target species that offer peak fishing opportunities even during the “dog days”.  I mentioned that White Bass and Wiper fishing can be hot, especially early and late in the day, on Nebraska reservoirs where those open-water predators herd open-water baitfish during mid- and late summer.  Nebraska also has some cold-water river and stream resources that offer Trout fishing opportunities year-around.  During a hot summer day, it can be refreshing to don an old pair of “tenner” shoes or some wading boots and walk right in.

Trout in those running waters are almost always relatively easy to catch as long as they are not spooked.  Fish ’em like you are still-hunting, wear camo, and you will dry off a few.  On the way home after some pointy-headed fish biologist meetings, I made a quick stop at one of our cold-water trout streams.  I did not fish long, only fished a hundred yards or so of stream, but a Brownie ate my Rapala on the first cast. My short rest stop and a hundred yards or so of creek produced three more Brown Trout in less than an hour.  I lost one of those fish and of course released the ones I put in the net. They were not big trout, 11-12 inchers, but the water sure felt good and I am refreshed every time I dip my feet into one of our Trout streams!

Again I have intentionally given a fishing report without telling exactly where I was fishing.  They were public waters, they were in Nebraska.  If you do some homework you can find your own adventures.  May I suggest you start here, Fishing the Sandhills, and here, Trout Fishing in Nebraska’s Streams.  If you do, you will learn more, might even become a better angler, but for sure will be further ahead than forensically studying my photos to figure out where I was. Game and Parks to Offer Two Free Workshops for Educators 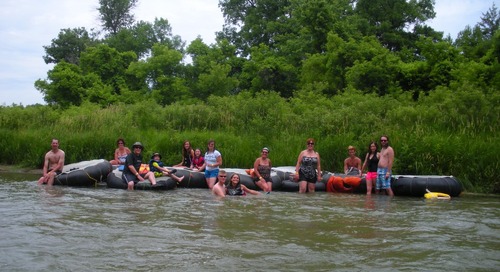 Leisurely floating in an inner tube on one of Nebraska’s many scenic river water trails is a cool, refreshi...